Urban sprawl has an fascinating side-effect in Europe. Medieval and early modern execution sites which used to be on roadways outside of town are turning up in people’s back yards. 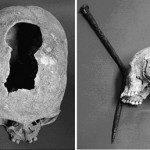 The finds are gruesomely informative. One site in Germany had a skeleton of a woman with a foot and a half long spike driven through her skull.

Apparently part of the executioner’s job was to decorate the area with dead people and body parts and whatnot to let visitors know the town was tough on crime. The lady’s head was nailed to a post as part of the “don’t fuck with us” decor.

She had it easy, though.

A skeleton from Friedlandburg near Göttingen demonstrates what kind of mess this brutal procedure produced. The ribs are shattered, lower legs and forearms broken, the skull’s left temple shattered.

Then the body was left to rot. The longest period of time recorded for a corpse to have been exposed on a wheel is 3 years.