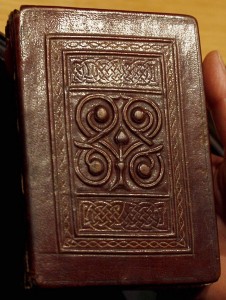 The British Library needs to raise £9 million ($14.5 million) over the next eight months to buy the 7th century St. Cuthbert Gospel, aka the Stonyhurst Gospel, the earliest book made in Europe to have survived intact. The pocket-sized copy of the Gospel of John was written and bound in finely tooled red goatskin at Monkwearmouth-Jarrow Abbey some time between 680 and 687, the year St. Cuthbert, Bishop of Lindisfarne, died. The gospel was placed in his casket when he was buried on Lindisfarne island.

Three years later, the seven-year-old Bede would become the pupil of the Ceolfrid, the abbot of Monkwearmouth-Jarrow who had been in charge when the St. Cuthbert Gospel was made. Thirty years after that, in 721, inspired by the recent discovery that Cuthbert’s body was uncorrupt, the Venerable Bede would write a hagiography of the saint: The Life and Miracles of St. Cuthbert.

In 793, the Vikings raided Lindesfarne for the first time, destroying the church at Lindisfarne. After the second Viking raid in 875, the monks of Lindisfarne fled and took the remains of their patron saint with them, first to various places in Northumbria and then to Durham. In 1104, Cuthbert’s coffin was opened once again so his remains could be moved to a new shrine behind the altar of Durham cathedral. Again his body was found to be uncorrupt, still flexible and smelling like a rose. The gospel was next to his head.

That’s where it remained until 1537 when Henry VIII sent emissaries to loot and destroy the saint’s tomb. They too found his body uncorrupt, but that didn’t deter them from making off with the jewels and ornaments buried with him, including the gospel. The book, now over 850 years old, passed into private hands. 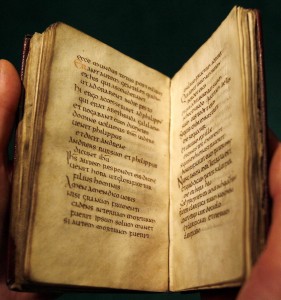 In 1769 it was given to the English Jesuit College at Liège. The Jesuits packed the book in a small oak box and placed it in the library, bringing it with them to England when the Liège college was moved and renamed Stonyhurst College. In 1979, the Society of Jesus loaned the gospel to the British Library, where it has been on display ever since.

The Jesuits have been privately offered large sums for the gospel which they’ve thus far turned down, but now they have decided to sell and use the profits to repair church buildings. Because they don’t suck, they offered the British Library the chance to buy it for £9 million before putting it up for auction. That’s a good price, too, because of the incredible condition the St. Cuthbert Gospel is in and what a Zelig-like fulcrum of British history it is.

The BL responded with alacrity, first securing a £4.5 million ($7.2 million) award from the National Heritage Memorial Fund. The British Library trusts chipped in £1.25 million ($2 million), the Art Fund and Garfield Weston Foundation £250,000 ($400,000) each. That leaves just £2.75 million to be secured. The British Library is optimistic that it will be raised in time, especially since they’ve signed a Memorandum of Understanding with the Durham World Heritage Site that they will share the book, and Durham is thrilled at the prospect of its homecoming.

“This wonderful book links us directly to Saxon Christianity of the north of England, and to the north’s best-loved saint, Cuthbert himself,” explained Reverend Michael Sadgrove, the Dean of Durham.

“Durham Cathedral owes its very existence to him, and we prize not only his memory, but also the treasures associated with him here at the Cathedral such as his pectoral cross and portable altar.

“It is a vital part of our cultural and spiritual heritage. The Gospel speaks powerfully about Northumbria’s golden age, whose spiritual vision, intellectual energy and artistic achievement continue to inspire us today.

“We are in the British Library’s debt for having taken this initiative and must make sure it succeeds.”