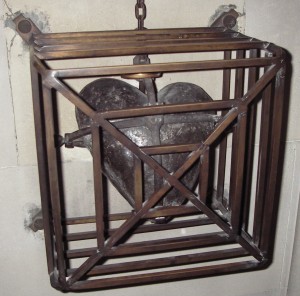 The heart of St. Laurence O’Toole, patron saint of Dublin, was stolen from Christ Church Cathedral sometime between midnight and 12:30 PM Saturday. The heart of the 12th century saint was kept in a heart-shaped wooden box which was held inside a container made of iron bars and hung by a chain on display in Saint Lauds Chapel. The thief or thieves used bolt cutters to break off then bend back the bars on the front side of the box, then reached in and took the wooden box.

Gardaí (Irish police officers) are investigating. They’ve checked CCTV footage of everyone who entered the cathedral between the time it opened at 9:30 AM and when the theft was discovered at 12:30 PM. There were about 40 visitors during that period, and none of them are filmed walking out with a heart-shaped box. There are no signs of a break-in, so it’s possible the thief hid in the church before it was closed for the night only to emerge, steal the heart, and sneak away unseen. A staffer saw a lit candle in the church when he arrived to open the cathedral doors in the morning, perhaps lit by the thief for the expiation of at least one major sin.

The dean of Christ Church Cathedral, the Rev Dermot Dunne, said he was “devastated” by the theft. “It is a priceless treasure that links our present foundation with its founding father,” he said. A church spokeswoman added: “It’s completely bizarre. They didn’t touch anything else. They specifically targeted this. They wanted the heart of Saint Laurence O’Toole.”

There were objects of easily convertible monetary value — like gold chalices and candlesticks — in that chapel that the thieves left untouched.

St. Laurence O’Toole was born Lorcán Ua Tuathail, the son of a local chieftain, in Kildare County, Ireland in 1128. As a boy, Laurence had been kept as a hostage by his father’s liege lord and former enemy. By the time his captivity — which included a spell spent in solitary confinement in a herdsman’s hut — was over, he knew he wanted to be a monk. Despite his ascetic hermit inclinations, he was an extremely successful monk, becoming abbot of a monastery in Glendalough at the age of 25. Just seven years later in 1162 he was made archbishop of Dublin, the first native Irishman to wear that cap.

After the Anglo-Norman invasion of Ireland in 1170, St. Laurence helped negotiate peace terms between Henry II of England and Irish king Rory O’Connor. Henry was concerned that the Norman knights would carve themselves out fiefdoms on Ireland that would put them beyond his control. The 1175 Treaty of Windsor confirmed Rory O’Connor as High King of Ireland but as a vassal of King Henry II. The rest of the Irish chieftains and kinglings were to keep their territories and titles as long as they acknowledged Henry as their suzerain and paid him tribute via Rory O’Connor. Laurence O’Toole was one of the treaty’s witnesses.

His relationship with Henry deteriorated, however, after St. Laurence went to Rome for the Third Lateran Council in 1179. Henry made Laurence swear that he would uphold Henry’s rights in Ireland at the council, but Laurence saw to it that the Dublin diocese was put under the direct protection of Pope Alexander III. In the Treaty of Windsor, the Irish Church had been structured as subordinate to Canterbury. Henry II very famously was not fond of clerics asserting their rights at the expense of the crown.

In 1180, Rory O’Connor sent St. Laurence to negotiate tribute with Henry II. Henry was in no mood to parlay with Laurence and kept him waiting in England for weeks, refusing to see him. When Henry left for Normandy, Laurence followed him. Sick and exhausted from the voyage, St. Laurence got as far the Abbey of St. Victor at Eu, Normandy before he could go no further. He died at Eu on November 14, 1180.

It was the monks at Eu who documented his life, preserved his mortal remains and kept a record of all the miracles that happened at his tomb. Thanks to that documentation, Pope Honorius III canonized Laurence in 1225, just 45 years after his death. At some point in the next 55 years, his heart was moved to Christ Church Cathedral. The cathedral has been a major pilgrimage site ever since.