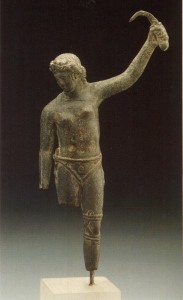 University of Granada researcher Alfonso Manas believes a bronze statue in the permanent collection of Germany’s Museum für Kunst und Gewerbein of Hamburg is an extremely rare depiction of a female gladiator, sword raised in victory while she looks down at an unseen defeated opponent. The statue is of a woman wearing nothing but a loincloth and a bandage around her left knee. In her left hand she raises aloft a sica, a short curved blade used by the thraex or Thracian type gladiator.

Thracians, however, also carried a small shield and wore armor — a helmet, greaves, an arm and shoulder piece called a manica, or sleeve — while this figure does not. The lack of armor suggests an athlete rather than a gladiator. The curved implement could be a strigil, a cleaning tool used to scrape oil and dirt off the body. Athletes were often depicted in the act of strigiling themselves, but the raised arm doesn’t fit with that tradition at all. The strigil stays connected to the body, or at least close to it, during the cleaning process. Holding a strigil aloft makes no sense. It’s much more in keeping with gladiatorial gestures of victory than with athletic hygiene.

In addition, female athletes in the Roman world did not go completely topless, as they would wear a bikini or “a tunic that left one breast exposed,” Manas pointed out. “In any case, female athletes never performed with bare breasts,” at least not with both exposed. Gladiators, on the other hand, tended to be slaves or people of low social status; depicting them topless would have been considered more acceptable. The bandage the woman is wearing on her knee is also a common feature of gladiators.

Altogether, this evidence “seems to indicate that the statuette at the MKG [the museum] represents a gladiator, thus becoming the second piece of visual evidence we have of female gladiators,” Manas writes in a recent issue of the International Journal of the History of Sport.

The other piece of visual evidence is a marble relief discovered in the ancient Greek city of Halicarnassus (modern Bodrum, Turkey) and now in the British Museum. The relief depicts two gladiatrices called Amazon and Achillia who have fought valiantly to a draw (stantes missio, meaning “dismissed while still standing”), a rare event requiring exceptional combat on both sides. Like the bronze, they are topless and wearing loincloths. Unlike the bronze, they wear traditional gladiatorial armature including greaves, a manica and a shield. 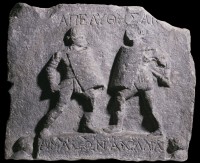 If there were any sexual implication of the nude gladiator, it would’ve been due to her low social status. “In the Roman mind, there would have [been] certain associations with the sexual availability of slaves,” [Ohio State University professor Anna] McCullough said. “Slaves were sort of expected to be sexually available to anyone at anytime, especially their masters.”

To, “depict a female gladiator, or a slave, nude was really no big deal,” she said. “It was an indication of their extremely low status.”

13 thoughts on “Is this a statue of a female gladiator?”