Remember how in Raiders of the Lost Ark the Nazis send that creepy Toht fellow to Nepal to track down the headpiece of the Staff of Ra so they can find the Ark of the Covenant and use it to unleash God’s face-melting wrath on their enemies in battle? Change Nepal to Tibet, Toht to zoologist and SS officer Ernst Schäfer, the Ark of the Covenant to the roots of the Aryan race, and the Staff of Ra to an iron statue of a Buddhist deity and it all really happened. (Okay not the face-melting.)

In 1938, Himmler sent Schäfer on an expedition to Tibet to trace the purported roots of the Aryan race. Schäfer himself, being an actual scientist instead of a mysticism-obsessed ignoramus like Himmler, was not keen on this plan. His goal was to document the geology, climate, flora, fauna and inhabitants of the region, but he had joined the SS in 1933, ostensibly just to be allowed to keep on working, so by 1938 he was well-versed in dirty Nazi compromise.

Between May of 1938 and August of 1939, Schäfer’s team traveled from the Indian Himalayan state of Sikkim to Lhasa to the Yarlung River Valley in western Tibet. They took tens of thousands of pictures, collected dozens of animal specimens, thousands of seeds, head casts and head measurements of hundreds of locals, a Tibetan mastiff and one iron statue of a deity with a swastika on his breastplate. 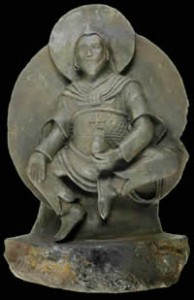 The swastika is of course an ancient symbol of the sun and good fortune, first appearing in the Indus Valley civilization about 3500 years ago. It came to religious prominence in the Far East with the spread of Buddhism but also appears in pre-Buddhist traditions like the early Bön religion of western Tibet, which included the swastika in its iconography in the 8th and 9th centuries. Since Aryanist theology held that the master race had conquered Asia after they fled the destruction of Atlantis (yeah, I know), Schäfer could well have thought this curious artifact would satisfy Himmler, who was very much into Hinduism and Buddhism and thought the Buddha himself might be the Aryan descendant of the post-Atlantis Nordic master race.

After Schäfer’s team returned to Munich, the iron statue dropped out of sight. It wasn’t until 2007 that its anonymous new owner reached out to a team of scientists led by Dr. Elmar Buchner from the Institute of Planetology at the University of Stuttgart to see if they could find out more about it. He only let them test the figure in a very limited way, however. They weren’t allowed to take any significant samples; they could only literally scrape the surface in an attempt to determine what the statue was made of. In 2009, the Iron Man, as he became known, was sold at auction. Since then, it has been in the hands of one of Buchner’s team and they have had full access to do whatever tests they wish on it.

The statue weighs about 23 pounds and is about 10 inches tall and 5 inches wide. It’s hard to determine exactly who it depicts, but Buchner thinks it’s a Bön culture artifact from the 11th century portraying a version of the Buddhist deity Vaisravana, known in Tibet as Jambhala. He is the god of fortune and wealth (which would be in keeping with the swastika), or sometimes a god of war (which would be in keeping with the armor he’s wearing). There are things missing, though; iconography and attributes you see in later depictions of Vaisravana are not present here. Some, like a flaming trident he holds in the crook of his left arm, could have been lost over the centuries. Buchner’s working theory is that the statue is a transitional figure that incorporates both pre-Buddhist and Buddhist elements, which is why it’s non-standard in some ways.

The most unusual part of it is not the iconography, but rather its composition. Buchner knew from the moment their eyes met across a crowded lab that Iron Man’s iron came from a meteorite. He could tell from thumb-like impressions left on the surface when the meteorite melted during its crash landing. Geochemical analyses confirmed that the Iron Man’s iron wasn’t just from a meteorite, but from the rarest of them all: an ataxite. The high levels of nickel and cobalt in the iron marked it as an ataxite class meteorite. Less than 1% of iron meteorites and less than .1% of all meteorites are ataxites.

Even more exceptionally, the researchers were able to pin down exactly which meteorite it had been carved out of. The geochemical data match those of the Chinga meteorite which fell to earth between Mongolia and Siberia about 15,000 years ago. The first reports of its discovery were made in 1913, but someone found a piece a lot earlier than that, almost a thousand years earlier than that, in fact.

The carver had to have known it was special because chiseling this kind of iron is a tough, tough job. Perhaps he had an inkling it came from the sky — there’s a long history of meteorites being treated with religious reverence in many cultures — or perhaps he just thought it was so unique it was perfect for depicting a god. After the carving, the figure was forged around the edges and base, and then gilded. Only traces of the gilding remain today.

Other meteorites that have been held to be holy were worshipped in rock form. Objects like knives and jewelry have been found carved from meteorites, as have animal figures like eagles. There are references in the historical record to the Tibetan craft of carving “sky iron,” but that craft has long since died out and none of the references mention the carving of humans or anthropomorphic deities. As far as we know, this statue is the only depiction of a human figure carved into a meteorite that’s ever been found.