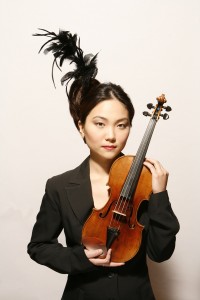 A Stradivarius violin stolen from South Korean violinist Min-Jin Kym on November 29th, 2010, when she was having a gnosh with her cellist boyfriend at a Pret a Manger in London’s Euston station has been recovered by the British Transport Police (BTP). The violin, crafted by the great Cremona master Antonio Stradivari in 1698, is worth an estimated £1.2 million ($1.82 million). It was in a black carrying case that also held two valuable bows, a Peccatte bow worth £62,000 ($94,000) and a bow from the Bazin school worth more than £5,000 ($7,600). Ms. Kym placed the case on the floor for a few minutes while she ate and the next thing she knew, it was gone.

She immediately called the police to report the theft. The British Transport Police looked at CCTV footage of the station and identified the thief as an adult man who sat next to Kym while she ate her £2.95 ($4.50) sandwich and made a phone call. Two teenagers distracted the staff so the thief could take the case without being noticed, and then the three of them quickly left the Pret a Manger.

Min-Jin Kym (34) bought the violin in 2000 for £750,000 ($1.14 million), her life savings. She had been playing the Stradivarius since it was first loaned to her when she was a teenager (her international debut was with the Berlin Symphony Orchestra when she was just 13 years old). She had the instrument insured by Lloyd’s Canopius Group for the amount she paid for it, but over the decade it had increased in market value, and most importantly, it was priceless to the artist, part of her identity as a musician and a precious treasure to the musical world that she felt herself a custodian of more than just an owner. The insurance company offered a £15,000 ($22,000) reward for the instrument’s return and the authorities made a public appeal for information. The CCTV images were released to the BBC program Crimewatch.

Four weeks after the episode aired, the police had the three culprits in custody: Dublin-born Irish traveller John Maughan (40 years old when captured), a career criminal with 65 convictions on his record, most of them for the theft, who has used more than 40 aliases with 26 different birthdays, and two youths aged 14 and 16 who cannot be named because they’re not adults. None of them had any idea what a rare artifact they had so larcenously acquired.

The day after the theft, Maughan and his accomplices went to an internet café in Tottenham Court Road where they Googled “Stradivarius” and “1698,” the year of the violin’s manufacture. Somebody sitting next to them noticed their search terms and they engaged him in conversation. Proving yet again how many thieves are complete idiots, they tried to sell the violin to this random guy in an internet café for £100 ($151). He refused, and he actually told them this, because his daughter already has a musical instrument: a recorder.

In March of 2011, Maughan was sentenced to four and a half years in jail. His accomplices were remanded to juvenile detention. All three were said to be cooperating with police in the recovery of the violin, but to no avail. The violin, bows and case were still missing. In February of this year a purported Stradivarius violin turned up in a sting in Bulgaria. The BTP investigated if it might be Min-Jin Kym’s, but it turned out to be a fake, made no more than 100 years ago.

The BTP never thought the violin had left the county, so they kept working their leads UK-side. Last week, the real thing was found in a property in the Midlands. Police aren’t providing any details about how this came about other than to say it was the result of a line of enquiry they’d been pursuing for some time. The violin appears to be in good condition, with only minor damage visible. It is being kept at an undisclosed London location where experts are assessing its needs.

Since the insurance company paid out after the theft, it is now the technical owner of the violin. They don’t want to be mean about it, though, and will be working on a deal so that Min-Jin Kym can buy her precious back.

Here’s Kym talking about the crushing guilt she felt at having lost her Stadivarius and her reaction to the great news: