A letter written on papyrus 1800 years ago by an Egyptian soldier serving in the Roman army has just been fully deciphered by Rice University doctoral candidate Grant Adamson.

The papyrus is one of more than 30,000 discovered in the Egyptian city of Tebtunis 90 miles southwest of Cairo during an 1899-1900 archaeological expedition led by British papyrologists Bernard P. Grenfell and Arthur S. Hunt. They were the first to excavate Tebtunis and they hit papyrus paydirt almost immediately. The dig began December 3rd, 1899, and within a month they had already unearthed hundreds of papyri in the ancient town and in the main temple complex. In January of 1900, they found another two rich papyrology veins in the city necropolis. One was a group of more than fifty human mummies encased in cartonnage, a papier-mâché-like material that used recycled papyri. The other was a group of more than 1,000 mummified crocodiles, 31 of which were wrapped in recycled papyrus.

We know this because they unwrapped the mummies shortly after excavation just to get to the papyri, a conservation nightmare to modern sensibilities. For comparison, here are two mummified crocodiles unearthed by Grenfell and Hunt at Tebtunis. The first is still wrapped in its original reed, textile and painted cartonnage face mask. The second was unwrapped on site.

The papyri found in the temple complex were the most recent, written when Egypt was under Roman rule in the first three centuries of the first millennium. Almost all of them were written in Greek with a few written in Demotic. The temple was dedicated to the crocodile god Soknebtunis (a local the name for the god that translates to “Sobek, Lord of Tebtunis”) and the priests lived in houses in the temple complex. Many papyri were discovered in those priestly homes, a vast collection of documents ranging from tax receipts to apprenticeship contracts, petitions to minutes of priest meetings, loans to private correspondence. 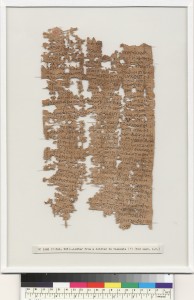 Grenfell and Hunt published the Soknebtunis papyri in Volume II of their three-volume work The Tebtunis Papyri, but many of the translations were incomplete. For document 583, only a short summary was published. That letter is now in the papyrus collection of the Bancroft Library, University of California, Berkeley, which is where Grant Adamson studied in seeking to finish the job Grenfell and Hunt started more than a century ago. He had the benefit of new technology to help him make sense of the faded and fragmented writing: infrared imaging which makes illegible text visible.

The letter was written by one Aurelius Polion, soldier of the legio II Adiutrix stationed in Pannonia Inferior, around present-day Hungary, in the third century A.D. and is forlorn in tone.

Addressed to his mother (a bread seller), sister and brother, part of it reads: “I pray that you are in good health night and day, and I always make obeisance before all the gods on your behalf. I do not cease writing to you, but you do not have me in mind,” it reads.

“I am worried about you because although you received letters from me often, you never wrote back to me so that I may know how you …” (Part of the letter hasn’t survived.)

Polion says he has written six letters to his family without response, suggesting some sort of family tensions.

“While away in Pannonia I sent (letters) to you, but you treat me so as a stranger,” he writes. “I shall obtain leave from the consular (commander), and I shall come to you so that you may know that I am your brother …” 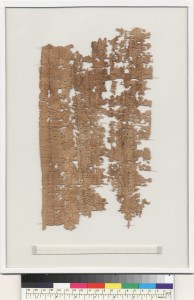 We don’t know if that stinging rebuke reached its intended recipients, but it seems likely since we know it found its way to Egypt and to the temple of Soknebtunis. It seems Polion entrusted the letter to a former Roman soldier rather than the Roman military postal system. The verso of the letter gives hand delivery instructions to someone whose name may have been (the fragmentary papyrus makes it unclear) Acutius Leon.

For more information about the Tebtunis papyri, including translations of featured pieces and a searchable database of the papyrus collection, see the website of The Center for the Tebtunis Papyri.