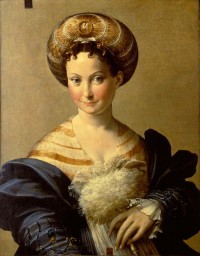 The only thing we know for sure is that this iconic beauty was neither Turkish nor a slave. La Schiava Turca was a misnomer applied in the 18th century by a cataloger who interpreted the lady’s headdress as a turban and the gold chain in the slashes of her right sleeve as a symbol of bondage. In fact, her headpiece is a balzo, a wire net covered in fabric and gold thread that was fashionable among Northern Italian noblewomen in the 16th century thanks to trendsetter Isabella d’Este (see her 1534-6 portrait by Titian, now in Vienna’s Kunsthistorisches Museum, or Portrait of a Lady (1520-25) by Bernardino Luini, now in the National Gallery of Art). The chain is expensive gold jewelry and her indigo satin dress, gossamer silk chemise and ostrich plume fan confirm that the sitter was a woman of wealth and position.

She was painted by Francesco Girolamo Mazzola, aka Parmigianino, around 1532 or 1533 when he was in Parma working on two altarpieces for the Sanctuary of Santa Maria della Steccata. Its whereabouts for the next century and a half are unknown. It appears again in a 1675 inventory of the collection of Cardinal Leopold de’ Medici in Florence. In the 18th century Parmigianino’s lady was ceded to the Uffizi Gallery along with the rest of the Medici art holdings. In 1928 the Uffizi traded it to the National Gallery of Parma and the portrait went home for good.

Since then, it has rarely left the museum and it has never crossed the Atlantic to delight American audiences. Now for the first time La Schiava Turca is traveling to the US. It is the star of The Poetry of Parmigianino’s “Schiava Turca” which runs at The Frick Collection from May 13th to July 20th and at San Francisco’s Legion of Honor museum from July 26th through October 5th. There are no portraits by Parmigianino in any public collection in the US and there are two in this show (the other is Portrait of a Man), so this is a unique opportunity.

Art historians have proposed a variety of identifications of the not-actually-a Turkish Slave. Candidates include Giulia Gonzaga around the time of her marriage to Vespasiano Colonna in 1526 when she was 14 years old, a member of the Cavalli family, a member of the Baiardo family whose scion Cavaliere Francesco Baiardo was a personal friend and big supporter of the artist, even bailing him out when he was arrested for breach of contract when he didn’t finish the Santa Maria della Steccata commission.

Another possibility is that she’s not a specific person but a depiction of an ideal figure, perhaps an allegory of love or poetry. The medallion in the center of her balzo could be a poetry reference. It’s an image of Pegasus, the winged mythological horse who created the Hippocrene spring, source of poetic inspiration. The connection between poetry and Pegasus was well-established in 16th century Italy. The prominent poet Pietro Bembo, a contemporary of Parmigianino’s, used Pegasus as his personal symbol.

She’s not the usual Renaissance allegory or muse of poetry, however. From the exhibition press release (pdf):

Her active pose — with her face turned toward the left and her body to the right — is common in depictions of men of the time, but not women. Also, her direct gaze and lively expression stand out when compared to the reserved, aloof expressions often seen in Renaissance portraits of women, in which it was considered appropriate to retain a dignified modesty. Finally, the Pegasus ornament on her headdress is an accessory borrowed from men’s fashion: it is likely a hat badge, an adornment worn almost exclusively by Renaissance men that bears a personal, usually humanist, emblem. With her frank expression, typically “masculine” pose, and an accessory appropriated from male fashion, it seems reasonable to believe that the Schiava Turca was intended to be seen not so much as the passive recipient of male poetic dedication, but to be regarded as a poet herself. After all, she wears on her head — the source of intellect and creativity — an emblem of Pegasus, the symbol of poetic inspiration.

Exhibition guest curator and Columbia University Art History lecturer Aimee Ng discovered another clue while researching the portrait. Parmigianino was known to make many preparatory drawings and studies for his paintings. There are two red chalk head drawings in Paris that art historians believe were studies for the Schiava Turca. Ng’s research found a third drawing in the Duke of Devonshire’s collection at Chatsworth, previously unconnected to any specific painting, that shares significant commonalities with La Schiava Turca and makes the poet image even more explicit.

The pen-and-ink drawing, which had not previously been linked to any specific project, shares the bust-length format of the Schiava Turca (although the woman in the drawing poses with her head facing in the same direction as her body). In the drawing, the woman wears a balzo-like headdress decorated with a wreath of laurel leaves. In the classical tradition, laurel leaves are used to crown accomplished poets. As it shows the artist experimenting with the standard iconography of poetry, the drawing may record an early idea for the Schiava Turca. In the end, Parmigianino’s use of an ornamental badge of Pegasus to mark the Schiava Turca as a poet is a more subtle (indeed, more poetic) solution.

So if she’s a poet rather than an allegory of poetry, which poet is she? Ng proposes one possible candidate: Veronica Gambara, a poet whose works while unpublished were widely circulated in manuscript form by 1530. She was also the ruler of the city of Correggio from the death of her husband in 1518 until her death in 1550, and her good friend Antonio Allegri, better known as Correggio because that’s where he was born, was Parmigianino’s former teacher. She traveled to Parma and lived in Bologna when Parmigianino lived there after the Sack of Rome. Pietro Bembo of Pegasus fame was Gambara’s mentor; they had corresponded since she was a teenager.

If it is Gambara, it’s still a highly idealized portrayal. She was born in 1485, so she would have been in her late 40s when Parmigianino painted the portrait. Rolling back the years, or even decades, was a common practice for portraits of nobility (the Titian portrait of Isabella d’Este was painted when she was over 60), so her age doesn’t exclude her.

Aimee Ng will be giving a lecture at The Frick about the Schiava Turca on Wednesday, May 14th, at 6:00 PM. If you can’t make it to New York on time, you can attend virtually here.

2 thoughts on “Who was Parmigianino’s Turkish Slave?”