Archaeologists excavating a tomb complex in Zaoyang in the central Chinese province of Hubei have unearthed 28 chariots and 49 pairs of horses dating to the Spring and Autumn Period (770-476 B.C.). The chariots and horses were buried separately. The chariot pit, an impressive 33 meters (108 feet) long and four meters (13 feet) wide, was discovered first. Unlike other ancient chariot burials which feature the vehicles positioned vertically as if ready for use (see this tomb, for instance, discovered in 2011 in Luoyang, about 200 miles north of Zaoyang), the chariots in this pit were dismantled, the wheels laid along the edges and the rest of the parts placed carefully one-by-one between them. Along with the large wooden sections of the chariot, archaeologists found beautifully engraved bronze artifacts. The smaller ones are chariot fittings and parts; long cylindrical pieces were probably axles.

The large square horse pit was found 15 or so feet away. The skeletal remains showed no sign of a struggle, so the beasts were not buried alive. They were killed and then buried on their sides back-to-back in pairs, just as they would have drawn the chariots.

The Spring and Autumn Period was an era in which the power of the Zhou kings was collapsing. In 771 B.C., King You of Zhou, last king of the Wester Zhou, was killed when his father-in-law the Marquess of Shen allied with the northern nomadic Quanrong tribe to overthrow the king who had exiled his daughter and disinherited his grandson in favor of one of his concubines. The Marquess and his supporters put the formerly dispossessed Crown Prince Yijiu on the throne. He took the name King Ping and moved his capital east to Luoyang, away from marauding barbarians, thus kicking off the Eastern Zhou period.

The relatives and favorites who had received territories from the Zhou kings as vassals stepped into the power vacuum and became vassals in name only. The feudal system broke down into smaller and smaller statelets controlled by warlords, some of them the size of a single village or city. This is known as the Spring and Autumn Period after the Spring and Autumn Annals, a chronicle documenting the history of the state of Lu from 722 to 481 B.C. that was once thought to have been edited by Confucius and as such is held to be the first of the Five Classics of Chinese Literature.

The tomb found in Zaoyang must have belonged to one of these local lords. Chariots were very expensive, sophisticated technology that came to their apex of importance in the Spring and Autumn Period. Someone who could afford to be buried with dozens of chariots and their horses was demonstrating great military (and consequently political) power.

Not all of the 30 tombs so far uncovered are this large. There are a variety of sizes and a large number of grave goods. So far archaeologists have excavated only some of the complex but they’ve already unearthed more than 400 bronze and pottery artifacts, including a mystery item that could have been part of a farming implement or chariot fixture that is inscribed with Old Chinese characters. They’ve also discovered the remains of two important musical instruments. One is a Se, a 25-string zither-like instrument, that is the earliest ever recovered. Only half of it still survives, but you can see the holes where the strings were threaded through. 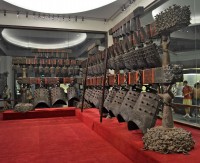 The other is part of a bianzhong set, arrays of bronze chimes mounted on lacquered beams and played by teams of musicians striking the sides and centers with wooden mallets. Although only seven fragments of the bases of the bells and one beam have survived, they indicate this was an extremely important set. The beam is 4.7 meters (15.4 feet) long and the chimes are decorated with dragons and phoenixes, symbols of royalty in Chinese iconography. (Some news stories are reporting it as the longest bianzhong beam ever found, but the long side of the exceptional 64-bell set discovered intact in the tomb of Marquis Yi of Zeng in 1978 is 7.48 meters (24.5 feet) long. I think the archaeologists meant they had personally never excavated one this size before and it got lost in translation.)