The University of Leicester has released a video of the forensic examination of Richard III’s skull that revealed the blow that is likely to have been the coup de grâce. The video captures the moment (in real time, this is not a reenactment) when Professor Guy Rutty of the East Midlands Forensic Pathology Unit working with University osteologist Dr. Jo Appleby traced the trajectory of a penetrating wound from a sharp weapon that would certainly have been fatal. 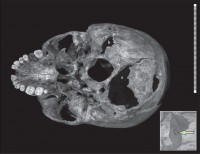 Out of the nine injuries to the skull, there are two candidates for wounds that caused Richard’s death: a big hole on the right side of the occiput at the base of the skull caused by sharp-force trauma from a large bladed weapon like a halberd, and a smaller penetrating wound with radiating fracture to the left side of the occiput caused by the pointed tip of an edged weapon like a sword or the spike of a polearm weapon like a halberd or bill. (For more details about Richard’s wounds and the weapons that may have caused them, see this article from the Royal Armouries.)

At the time of the press conference announcing the early results of the study of the skeleton, the larger injury seemed the likeliest fatal wound. The smaller one of the two wasn’t even mentioned, that I recall.

In the video Professor Rutty, who was a Home Office forensic pathologist for 19 years, and Dr. Appleby slide a thin metal rod through the smaller penetrating wound. They align it with a cut mark on the left posterior arch of Richard’s first cervical vertebra to determine the angle of the blow and finds that the rod culminates at a small flap injury that looks like a tiny divot on the inner surface of the cranium. The three aligned injuries strongly suggest that the point of an edged weapon was driven up through the back of his head up into the brain and penetrated the skull opposite the entry wound. That’s a distance of 10.5 centimeters, or just over four inches.

The audio is rough and there is no closed captioning option, but it’s still neat to see the moment when all the wounds aligned. If you’d like to get a fuller picture, read the paper on the examination of Richard’s perimortem wounds published in The Lancet.

The video is one of 26 shot by a University videographer to document the discovery, study and reburial of Richard’s bones. Ten others are currently available for viewing on the University’s dedicated Richard III website. The set won’t be complete until the funerary cortege on Sunday, March 22nd, the lying in state and finally the reinterment ceremony on Thursday, March 26th, are recorded.

While I’m on the subject, I am compelled to recommend the episode of the PBS series Secrets of the Dead in which a young man with scoliosis very similar to Richard’s in degree and shape of spinal curvature volunteers to be put through the paces of medieval combat to study how effective the last king of England to die in battle would have been as a fighter. It is fascinating to see what he can and can’t do. Spoiler: he can do an amazing amount, and unlike Richard, he only got broadsword and horseback training for a couple of weeks in his adulthood. The best part is the extremely badass custom suit of armor a blacksmith makes for him. It needs some modification from the standard template because of certain anatomical peculiarities caused by his scoliosis (mainly the lack of a usable waist for armor purposes), but once he’s in it you wouldn’t know there’s anything at all unusual about that knight.

If you have any questions about how a man with Richard’s disability could perform on the battlefield, watch this show. I’ve already watched it twice it’s so good. I might have to make that thrice now that I’ve reminded myself of how awesome it is.