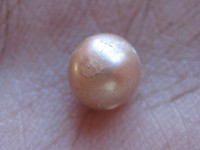 In 2011, archaeologists from the University of Wollongong (UOW) and the University of New England (UNE) excavating the Brremangurey Rockshelter on the north Kimberley coast of Western Australia discovered a pearl in the site’s shell midden. The rockshelter was used by Indigenous peoples for more than 12,000 years, as attested by rock art and shell middens. The pearl was found in a layer of marine shell that radiocarbon dating found was 1800-1906 years old. It is the only pearl known to have been recovered from a prehistoric archaeological site in Australia.

The unique find caused much excitement in the community because of the area’s rich pearling history. The harvest of natural South Sea pearls from the large oyster species Pinctada maxima was a major industry along the Kimberley Coast in the 19th century, and while those beds collapsed more than a century ago, since the introduction of the Japanese techniques of pearl culturing in the 1950s, the coastline has been a center of pearl production.

The marine pearl is small but comely at 5.9mm in maximum diameter and weighing a quarter of a gram. Its petite size, warm golden-rose color and almost spherical shape are characteristic features of a cultured Akoya pearl rather than a natural South Sea pearl. Local pearl experts thought it more likely to be an intrusive cultured pearl that somehow made its way into an ancient midden pile instead of the one and only prehistoric pearl ever found in Australia. Indeed, tests on the midden pile found that some of the deposits had experienced significant time-averaging and downward movement of shell layers.

In order to determine the pearl’s true nature, the archaeological team had to eschew the usual analytic methodologies like radiocarbon dating and stable isotope analysis because they result in the destruction of samples. Instead they teamed up with Cygnet Bay Pearl Farm to do a comparative analysis of a cultured Akoya pearls with the Brremangurey pearl using non-invasive X-ray computed microtomography to capture the pearls’ inner architecture. They scanned three Cygnet Bay pearls — two seeded in 2010 and harvested in 2012, one keshi pearl that grew without a bead — and the Brremangurey pearl.

The scans left no doubt whatsoever that the Brremangurey pearl is natural. The CT scans of the seeded pearls showed a very clear homogeneous spherical nucleus (the bead made of crushed and compacted Mississippi mussel shells) wrapped in two relatively thick layers of nacre, one per year of growth. The Brremangurey pearl has a much smaller nucleus and 14 thin layers of nacre. There is no pearl farmer in his right mind willing to wait 14 years for a six millimeter pearl to grow, nor has this ever been a practice in the history of pearl culturing.

The nucleus is also very different. Like the cultured bead, it is almost spherical, but that’s just a fluke. A separate scan of the nucleus itself underscored how different its structure is to the beads of the cultured pearls. Instead of being a solid homogeneous material, it has a tiny hollow center — a cyst formed as a result of damage to the edge of the mantle — surrounded by rays of calcium carbonate terminating in an exterior surface the published paper describes evocatively as “pustolose.” That surface was then wrapped in layer of nacre. That’s how natural pearls form.

“This analysis confirmed that it was a natural pearl that had grown inside a small pearl oyster for over a decade before the animal was harvested for eating,” [PhD student and co-author of the study Brent Koppel] said.

Although there are no records to suggest that pearls are of cultural significance to Indigenous peoples of the Kimberley, the pearl oyster shells which produce them are very important. The shells formed the basis of a historically-recorded trade which stretched from the Kimberley to the Central Desert. It is likely that the pearl at Brremangurey is a by-product of pearl shell collection. The great numbers of pearl shells within certain layers of the shell midden at Brremangurey suggests that the shells’ cultural value extends well back into prehistory.

You can read the paper about the pearl study here (pdf). The Brremangurey pearl will go on public display along with some of those highly significant prehistoric pearl shells in the Lustre: Pearling & Australia exhibition which opens on June 20th at the Western Australian Maritime Museum.