Unlike the scary 3000-year-old adipocere bog butter, the latest aged butter actually looks like butter. It’s 97 years old, and it’s been living at no more than 10 degrees Celsius since Captain Robert Scott left it at base camp during his ill-fated final expedition to the South Pole. 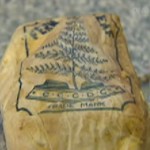 The Antarctic Heritage Trust has been restoring Scott’s Cape Evans hut. Despite the steady low temperature, the past couple of years have seen a lot more snow than usual, and it’s damaging the structure. While working on the pony stable (yes, Scott brought a bunch of Siberian ponies with him; it didn’t end well for them either), they found a wrinkled bag amidst a stack of empty boxes. Inside the bag they found two blocks of butter, much to their amazement.

“I think the butter was absolutely a treasure find,” Lizzie Meek of the Antarctic Heritage Trust told TV NZ. “It looked like an old wrinkly bag and you look inside and saw the wonderful Silver Fern logo,” she said.

She desribed the butter’s smell as “very pungent.”

“What’s amazing is how strong that smells,” she said. “I’m not sure I’d want it on my toast.”

Yeah no. Even in the freezer 100 years is a long time for any dairy product. On the other hand, maybe they just liked a bit of funk back then, like a cultured butter.

The silver fern is a familiar symbol to New Zealanders, most famous today as the logo of their legendary Rugby team, the All Blacks. Captain Scott’s team set off from New Zealand, so all their supplies were purchased there or donated by locals.

The maker’s label on the butter reads CCCDC, which probably stands for Canterbury Central Co-operative Dairy Company, a Christchurch company established in the 1890’s.

The AHT team plans to restore the butter, believe it or not. They’ll carefully remove the pieces of grit embedded in it and then just put it right back in the stable where they found it. Assuming its condition does not deteriorate, it should be fine in the frigid temperatures for another century at least. 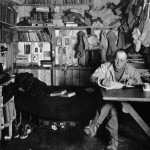 Captain Scott’s second expedition set out to be the first to reach the South Pole, but adverse weather and some questionable choices on Scott’s part ensured they got there second, five weeks after Norwegian explorer and sled dog expert Roald Amundsen.

Dejected by their loss, Scott and his team trudged through Antarctic blizzards for 3 months, until the final three of them died on March 29 , 1912, just 11 miles from the food and fuel depot. Scott himself appears to have been the last man to die. His touching final diary entry, found by a search party 8 months later, and the tragic finale of the expedition, made him a hero in the Commonwealth.

We took risks, we knew we took them; things have come out against us, and therefore we have no cause for complaint, but bow to the will of Providence, determined still to do our best to the last […] Had we lived, I should have had a tale to tell of the hardihood, endurance, and courage of my companions which would have stirred the heart of every Englishman. These rough notes and our dead bodies must tell the tale, but surely, surely, a great rich country like ours will see that those who are dependent on us are properly provided for.

You can follow Captain Scott’s last expedition as recorded in his diary entries posted on Twitter and on this blog for the full experience.

6 thoughts on “Now this I can believe is butter”