The complete original manuscript of General Theory of Relativity penned by Einstein’s very hand has gone on display today for the first time at the Israel Academy of Sciences and Humanities in Jerusalem. Einstein donated the manuscript to Hebrew University in Jerusalem when it was founded in 1925. He left them the rest of his documents in his will.

The manuscript has been kept in a safe at Hebrew University since the founding. A few pages have gone out on display to museums on occasion, but very rarely.

The University lent the manuscript to the Academy to put on a display worthy of its 50th anniversary celebration. The display will be open until March 25th, therefore overlapping the Academy’s anniversary festivities with the 131st anniversary of Einstein’s birth on March 14.

It took Einstein eight years after publishing his theory of special relativity — in which he came up with the famed equation EMC2 (squared) — to expand that into his theory of general relativity, in which he showed that gravity can affect space and time, a key to understanding basic forces of physics and natural phenomena, including the origin of the universe.

But exhibit organizers say the significance of Einstein’s pages of careful script, diagrams, and perfectionist’s scratches will not be lost on casual viewers. They say the display will present the manuscript in the context of the theory’s legacy — which includes everything from modern space exploration to commercial satellite and GPS technology and present-day attempts to create a universal explanation of the forces of nature, a quest that started decades ago and stymied even Einstein himself.

This is the first time the whole 46 pages are laid out in a darkened room, each page gently lit in its own protective casing. You can read every page, every chart, note, and doodle as Einstein wrote them. 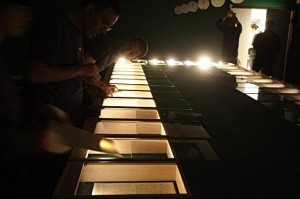