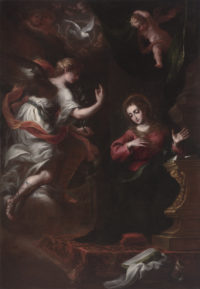 The large painting of the Annunciation had been hanging on the walls of Hearst Castle in San Simeon, California, since 1927 when newspaper magnate William Randolph Hearst bought it the California decorating company Cannell and Chaffin. Other than the obvious — its subject and impressive size (8.5 feet high by five feet wide) — nothing else was known about it, not where it came from, not its ownership history and not its author. That was unchanged for decades, even as the painting hung in the grand Assembly Room of the castle’s main building and was examined closely during two separate conservation treatments.

It took a shaft of light and two highly observant tour guides to illuminate the murky history of this artwork. Last November, Carson Cargill and Laurel Rodger were leading a tour in the late afternoon when the sun’s rays reflected off the mosaic floor lit the painting at just the right angle for them to see there was an inscription on Mary’s lectern. Neither of the previous conservations had recorded the presence of an inscription.

In a Feb. 21 interview, Cargill said, “the sunlight was reflecting off the mosaic tile floor in the West Vestibule” of the Assembly Room, shining on the painting and revealing the previously unreported name of the painter. He said, “at that point, you could see it” on the Virgin’s lectern.

After the tour ended and the Assembly Room was empty, he and fellow guide Rodger investigated further. The two have been Castle guides for three years, having been in the same training class.

Then, Cargill recalled, “Laurel saw an inscription” on the painting’s lower-left corner. He said that they “stood on chairs and used flashlights” to confirm what they had seen.

“Once we realized there was something significant,” he said, they took details of their find to [Museum Director Mary] Levkoff.

Rodger said, “At first, we weren’t really sure if we should be excited. But when I saw how excited Mary (Levkoff) was.”

Levkoff said she was overjoyed. Cargill said, “Then we had permission to be excited, elated!”

Levkoff then climbed a ladder herself and examined the inscription closely with a lantern. A little cellphone Googling later, she was able to identify the artist as Bartolomé Pérez de la Dehesa, a 17th century Spanish Baroque painter. She confirmed his identity by comparing the monogram to an authenticated work in the Cleveland Museum of Art, and by consulting with Spanish Baroque expert Dawson Carr, curator of European art at the Portland Museum of Art.

Pérez specialized in depicting flowers, usually in vases and baskets, sometimes accompanying religious scenes or as garlands surrounding portraits of saints. He also did fine decorative work, ornamenting architectural features in palaces and painting elaborate theater sets. That was what earned him the title of court painter to Charles II in 1689. There are no flowers in this work, however, which makes it high atypical for Pérez.

The discovery includes an abbreviation of the artist’s name and his title, located on the base of the Virgin’s lectern: “B.me P.z / Pic[t]or Reg[is].” A lengthy inscription in the lower left corner provides the name of the patron and the date, which was 1690.

The Annunciation painting is unique for Perez, Levkoff said, because he’s known primarily for his floral still-life paintings. She said art experts know of only a few large-scale figural compositions by the artist who was named official painter to King Charles II in 1689.

The inscription indicates the painting was commissioned for a side altar of a church, but which church that might have been we still don’t know. Pérez died in a fall from a scaffold when frescoing the palace of the Duke of Monteleón and multiple religious works, now lost were listed in his will, so the genre was something he explored more widely than most of his surviving oeuvre would indicate.

The Hearst Castle staff have made up for lost time by adding a spotlight to the display so the artist’s name, the patron and the date can finally have their day in the sun even when the sun isn’t reflecting off the mosaic floor in just the right way.