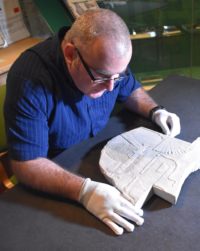 An unusual limestone relief in the stores Swansea University’s Egypt Centre has been identified as a depiction of the female pharaoh Hatshepsut. Egyptologist Dr. Ken Griffin was going through photographs of artifacts in the stores for a handling session with second year students when he came across a black and white picture of a relief that caught his eye. He selected it for the session. When it examining it with the students he recognized the iconography as very similar to that used in depictions of the fifth pharaoh of the 18th Dynasty (ca. 1478-1458 B.C.) and one of only five women known to have held that exalted position in all of Egyptian history.

The relief is in two pieces, offset from each other, irregularly shaped and incomplete. The pieces have been glued together at a join point that makes sense in the frontal view, but which leaves the top piece with this oddly orphaned back view depicting the profile of a bearded man from the nose down. The back bottom piece is rough, bearing the tell-tale marks of having been chiseled off its original location, so any finish at all on the top back 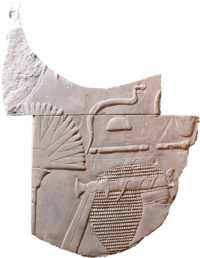 The front side depicts the head of a figure whose face is unfortunately missing, with the remains of a fan directly behind. Traces of hieroglyphs are also present above the head. The iconography of the piece indicates that it represents a ruler of Egypt, particularly with the presence of the uraeus (cobra) on the forehead of the figure.[…]

Having visited Egypt on over fifty occasions, Dr Griffin quickly recognised the iconography as being similar to reliefs within the temple of Hatshepsut at Deir el-Bahri (Luxor), which was constructed during the height of the New Kingdom. In particular, the treatment of the hair, the fillet headband with twisted uraeus, and the decoration of the fan are all well-known at Deir el-Bahri. Most importantly, the hieroglyphs above the head—part of a formulaic text attested elsewhere at the temple—use a feminine pronoun, a clear indication that the figure is female. […]

Yet the mystery of the precious find doesn’t end there. On the rear of the upper fragment, the head of a man with a short beard is depicted. Initially there was no explanation for this, but it is now clear that the upper fragment had been removed and recarved in more recent times in order to complete the face of the lower fragment. The replacement of the fragment below the figure would also explain the unusual cut of the upper fragment. This was probably done by an antiques dealer, auctioneer, or even the previous owner of the piece in order to increase its value and attractiveness. It was eventually decided at an unknown date to glue the fragments together in the original layout, which is how they now appear. 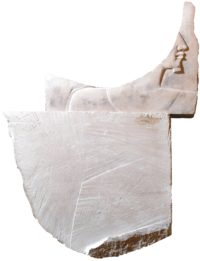 Research into the archives has so far not been able to explain how and when this important piece got the Frankenstein treatment. The fog of time and the lack of rigorousness in private collecting makes it unlikely that we’ll ever know the full story.

The Egypt Centre has housed the university’s small collection of Egyptian artifacts since 1998. It is both a museum open to the public and an important learning resource of Swansea’s Department of Classics and Ancient History. The artifacts were originally amassed by pharmacist Sir Henry Wellcome, whose ability to hoard antiquities and collectibles was on a par with the most profligate and indiscriminate William Randolph Hearst. After his death, the objects were managed by a trust who distributed to various museums and institutions. A few things remains, stored in the Petrie Museum, until 1971 when 92 crates of Egyptiana were delivered to what was then called the University College Swansea.

A few stand-out pieces were displayed, first in the Chemistry Department, then in the Classics Department, and the small collection grew, enhanced by donations from individuals and other museums. In the mid-1990s, Sybil Crouch, manager of the Taliesin Arts Centre, proposed that a dedicated museum space be created to house the collection properly and after much work and fund-raising, the Egypt Centre was born as a wing of the Taliesin Arts Centre.

The Hatshepsut relief was part of that original 1971 shipment from the Wellcome Collection, but there is so documentation regarding where it came from or when or from whom Henry Wellcome acquired it. The marks on the back of the uncarved bottom piece and the thinness of the limestone (it’s less than two inches thick) point to it having been removed from a temple or tomb wall. It’s very likely to have been part of Hatshepsut’s temple at Deir el-Bahri, and it may be possible to find the spot from whence it was removed, with a little bit of luck and help from the Polish Archaeological Mission to Egypt which has been documenting, excavating and conserving the temple since 1961.

Meanwhile, the relief is now on permanent display at the Egypt Centre.