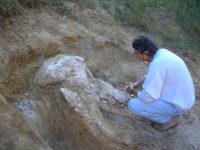 A farmer in the Haute-Garonne department of southwestern France has discovered the first-ever skull of a Pyrenean mastodon. He partially unearthed the fossil in 2014 while digging on his farm near the village of L’Isle-en-Dodon, about 40 miles southwest of Toulouse and 50 miles north of the Pyranees mountains. All he could tell was that it was a large, hard mass with teeth four inches long. Concerned that his fields would be overrun by would-be paleontologists looking for fossils, the farmer didn’t tell anyone about his find until 2016 when he reported it to the Natural History Museum of Toulouse.

In September of 2017, a team from the museum began excavating the skull. When the museum experts first saw the exposed sections, they recognized the fossil as a gomphotherium, an extinct ancestor of the elephant from the Miocene epoch (ca. 23-5 million years ago). It had four large tusks, two on the upper jaw, two on the lower, a powerful jaw, short trunk and small brain cavity. They probably lived in swampy areas, wetlands and lakes where they used their tusks to dig through the muddy terrain for vegetation.

As the museum experts exposed more of the skull, they realized it wasn’t from a more commonly found species of gomphotherium. It bore the distinctive characteristics of the gomphoterium pyrenaicum, a create so rare that its existence is only known from four molars discovered in 1857. Their large size and simple structure identified them as belonging to a separate species from other gomphoteria found in Europe, but that was the extent of the information that could be derived from such limited material.

“Now we have a full skull which will allow us to get a clearer picture of the anatomy of this species,” Duranthon said.

“We’re putting a face on a species which had become almost mythical,” the museum’s curator Pierre Dalous added.

The landowner allowed the team to remove the skull from the rock it was embedded in and donated it to the museum. They cut out a block of the stone surrounding the skull and transported it to the Natural History Museum where it is now being excavated in laboratory conditions, the stone chiseled away from the embedded fossil one centimeter at a time with extreme care to preserve every surviving part of it. (The tusks were damaged by the earth mover before it was discovered.) About half of the job has been completed thus far. They expect to be done and the skull to be fully revealed in six to nine months. 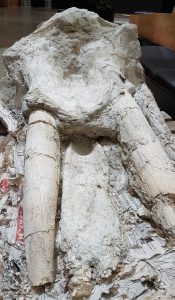