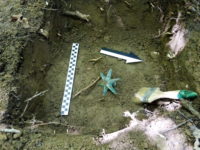 A Bronze Age mace head found near the town of Dukla in southeastern Poland may be the oldest non-local artifact ever discovered in Poland. It was unearthed by metal detectorists on June 1st and its advanced age and unusual provenance was recognized by an archaeologist called to the scene.

Krzysztof Wiśniewski, a truck driver at the open pit mine, is a member of the Galicja Exploration and Historical Association, a group of metal detector enthusiasts who organize search campaigns with all proper permits issued by the government. This campaign was seeking artifacts dating to the Second World War as there was believed to have been battles in the area during the German invasion in September 1939. They found some remains from World War I — a British uniform button, Austro-Hungarian buckle — a few shells and coins from the World War II era, but nothing particularly notable. 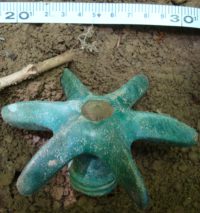 Then Wiśniewski saw a bronze object sticking out of the ground. At first he thought it was part of a candlestick or maybe a knob that had broken off some agricultural machine. When he went in for a closer look, however, he noticed the patina looked older. Others from the group crowded around to look at the piece, being careful not to touch it while they considered what it might be. They then called in Dr. Wojciech Pasterkiewicz from the Institute of Archaeology at the University of Rzeszów to examine the find in situ.

Even the expert was stumped by the find. He could think of no comparable artifacts found in Poland. Regional archaeological authorities were notified and a team of archaeologists dispatched to the find site for a more thorough excavation and exploration. Metal detectorists helped cover more ground in the area. Nothing else was found, making this one unique prehistoric object not just the stand-out artifact, but pretty much the only one there.

After researching the artifact, Dr. Pasterkiewicz believes it is a Bronze Age mace head dating to around 1000 B.C. No similar pieces have been found in Poland before, but there are comparable items found in the Middle East and other parts of Europe. A mace head from the Luristan region of western Iran dating to 1600-1000 B.C. with a similar albeit less pointy star-shaped design sold at auction last year. The best stylistic match is a late Bronze Age Hallstatt A culture mace head found near Cherkasy in central Ukraine. It dates to between 1200 and 1000 B.C.

The mace head would have been hafted to a wooden handle and used as a bludgeoning weapon or as a symbol of authority. How it made its way to southeastern Poland is unknown.

“The Dukla Pass is a convenient low-ground passageway through the Carpathian mountains from current-day Slovakia to Poland so it is no surprise that a foreign army may have moved along it in the distant past,” Pasterkiewicz speculated.

“It could have simply been lost, or maybe it was used in battle,” he added. 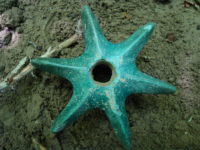 Given the lack of any other prehistoric materials at the find site and how shallow its burial, I’m not sure the idea of a foreign Bronze Age army marching through Dukla is the likeliest explanation. It seems more of an una tantum, perhaps something lost much later by a collector. Or hell, maybe the archaeologists got it all the way wrong and it really is a tap or a handle or a valve dial.

By Polish law, archaeological artifacts are property of the state while finders and landowners receive a finder’s fee. The Dukla mace head will be analyzed for metal content which might tell us the origin of the ore and a date range for its casting. Once it has been studied, it will go on display in a museum in Rzeszów.