A mechanical lion made by Leonardo da Vinci which once paid dazzling homage to the King of France has been recreated 500 years after the master’s death. The wood, metal and rope lion is 6’7″ high and 9’10” long is now on display at the Italian Cultural Institute in Paris. 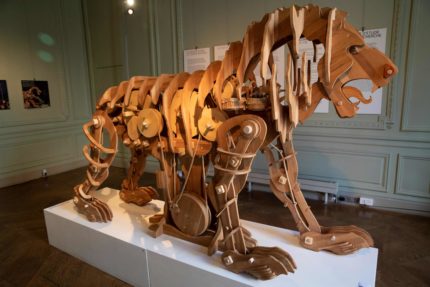 The lion automaton was commissioned in 1515 by Pope Leo X as a gift for the new King of France, Francis I. The immediate impetus was the new king’s triumphal entry into the city of Lyons, whose emblem is the lion, on July 12th, 1515. The city gave Francis a lion of pure gold, and the pope rolled with the theme. The lion was also a shared motif between the parties as the pope’s chosen pontifical name (Leo) and the designer’s given name (Leonardo from the Old German “strong as a lion”). The lilies symbolized a connection between France and Leo X. Leo, born Giovanni de’ Medici, son of Lorenzo the Magnificent, was a native of Florence, and a stylized lily was on the coat of arms of both France (fleur-de-lis) and Florence (giglio Fiorentino).

Lyons had a thriving community of Florentine merchants and bankers. Their patron was the pope’s nephew, Lorenzo di Piero de’ Medici, lord of Florence, and soon-to-be father of Catherine, future queen consort of France and mother to three kings of France. It was Lorenzo who brought the lion, manufactured by Leonardo in Florence, with him to the Lyons extravaganza.

Leo had good reason to curry favor with the new king. By 1515, the Papal States and France were on opposing sides on the War of the League of Cambrai and at the same time Francis was making his processional entry into Lyon, his army was poised to cross the Alps and retake the Duchy of Milan. Leo’s attempts at rapprochement began as soon as Francis ascended the throne in January 1515. On February 22nd, the pope officiated at the wedding of his brother Giuliano de’ Medici to Philiberta of Savoy, Francis’ maternal aunt. The extravagant lion was the embodiment of the hopefully expanding bonds — familiar, commercial, political, military — between the powerful families and states.

Leonardo’s da Vinci’s walking lion was written about for decades after its smash hit debut by the likes of Vasari and even Michelangelo, but detailed plans for it, if they existed, have not survived even amidst the hundreds of pages of anatomical, architectural and conceptual notes left behind by the Renaissance man. The best account we have comes second-hand from painter Giovanni Paolo Lomazzo who in 1584 wrote that Francesco Melzi, Leonardo’s student and favorite who would accompany him to France for the last years of his life, described the mechanical lion thus: “once in front of Francis I, King of France, he made walk from his place in a hall, a Lion, made with admirable artifice, and after stopping, opened its chest full of lilies and diverse flowers.” Lomazzo later wrote that the lion was made to locomote “by power of wheels,” likely a reference to the internal gear system rather than the wheels near its feet.

The recreation now on display in Paris is based on a few sketchy notes and designs in the Codex Madrid I. Researchers from the Leonardo 3 Museum used partial diagrams, including one of a pulley and wheel connected to legs, as a foundation, but many additional extrapolations were necessary to fill in what is basically a giant blank. One important assumption was that the lion walked by means of a system of springs and gears Leonardo would have known from Italian watchmakers and from Arabic automata that were then popular in Venice. 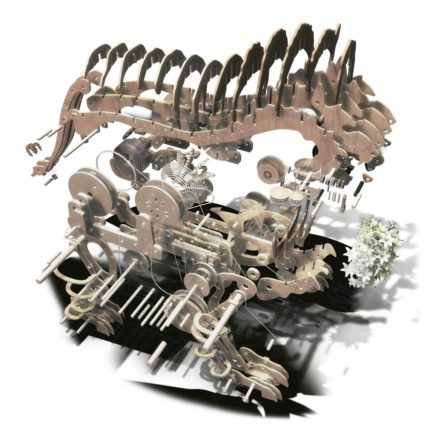 The lion will be exhibited until October 9th.