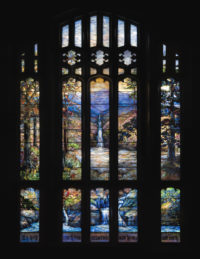 The Art Institute of Chicago’s most popular draw, Marc Chagall’s America Windows, will soon have a worthy companion in a monumental stained glass window by Tiffany Studios. It was purchased from the Community Church in Providence, Rhode Island, in June 2018, when its 48 layered-glass panels were painstakingly removed and transported to Chicago where it has been undergoing restoration.

The window is 23 feet high and 16 feet wide, one of the largest windows ever made by Tiffany. It is attributed to Agnes F. Northrop, Tiffany’s premier master of landscape and floral designs. It depicts a landscape of waterfall, pool and forest with Mt. Chocorua, one of the White Mountains’ most frequently painted vistas, in the background. An inscription across the lower lancets reads: My help / cometh from / the Lord who / made heaven / and earth. On the bottom right is the signature: Tiffany Studios / New York 1917.

It was commissioned by Mary L. Hartwell as a memorial to her late husband  fire extinguishing sprinkler magnate Frederick W. Hartwell who had died in 1911. Frederick Hartwell was born in New Hampshire and had lived there until he was 11 when he moved in with his uncle in Providence. The window nods to Mr. Hartwell’s birth state in its depiction of the White Mountains scene.

Mr. Hartwell had been a devout congregant and a very generous financial supporter of the Central Baptist Church of Providence. Originally founded in 1807 as the Second Baptist Church of Providence, it had moved and changed names repeatedly over the years. In 1917 it moved again to a brand new building and Mary Hartwell commissioned what would become known as the “Hartwell Memorial Window (Light in Heaven and Earth),” in memory of Frederick. 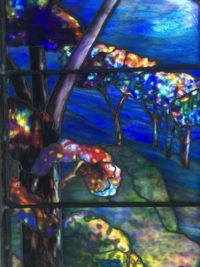 If you’re wondering why any person or institution would tear such a precious and beautiful piece of their history from its very walls, the church’s current name says it all. The Community Church of Providence is a small multi-denominational congregation that is entirely dedicated to serving its community.

Museum officials did not reveal the purchase price but said that price alone was not what determined who would buy the work. Leaders of the Community Church, in deciding to sell it, wanted it to go to a museum and they wanted to know the museum’s plan for care and display of the window, said Oehler.

“I really credit the church with this foresight and thinking about their role as stewards for the window,” she said. “They have a very community focused mission, and they’re not a museum, and they’re not in the business of protecting works of art.”

In the news release announcing the acquisition, Pastor Evan Howard of the church said, “We are extremely pleased that this exceptional work of art has entered such a renowned collection.”

In picking AIC as “the ideal institution to care for and display the window,” Howard said the church hopes that it will be “experienced by a broad public audience that includes scholars, artists and visitors from around the world.”

They sure know their monumental stained glass, too, what with the five-year restoration of the Chagall windows.

Conservation is expected to be complete in the fall of this year. So far the window has been cleaned, one third of the panels removed for glass repair with more minor repairs performed on the panels in situ. The restored window will be installed at the top of the Grand Staircase by the Michigan Avenue entrance. It will be framed and backlit to stun and amaze all who enter there. 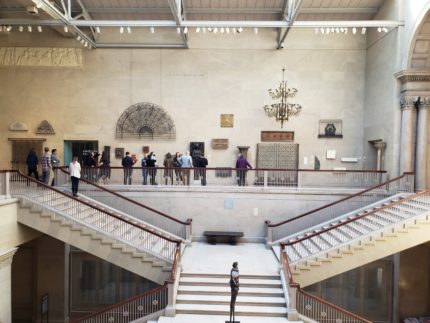