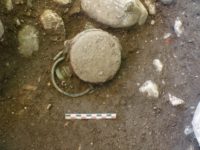 A metal legionary canteen in exceptional condition from the 4th century A.D. has been discovered at an ancient sanctuary site in the town of Seynod in southeastern France. Archaeologists from the National Institute for Preventive Archaeological Research (INRAP) were excavating the site near a future commercial area when they unearthed the remains of a Roman-era sacred precinct with at least two, perhaps three small temples and 42 pits in which religious offerings were deposited. Only the stone foundations of the structures survive, but for two out of the three, the floor plan of cella (a closed temple space) and vestibule can be clearly identified. Only a 16-foot section of wall and two wingwalls have survived from the third building, so while it’s likely that it too was a temple, too much of it has been destroyed to confirm.

Forty-one of the 42 pits are clustered in three groups of 13, 14 and 14. They vary widely in size, the largest opening more than six feet wide, the smallest just a foot and a half. Inside some of them were found rich furnishings, including coins, pottery and figurines. The canteen was found in one of them.

It is an iron and copper alloy flask called a laguncula that was part of the standard gear of the Roman legionary. It is one of only three ever discovered in Gaul one of very few complete ones ever found anywhere. It is made of two round iron shells joined together by flat copper alloy brackets. A copper alloy handle was attached to loops fixed at the top of the brackets. The copper alloy stopper is still in place. It was connected to the flask with a bronze wire of which a fragment remains. The base, also copper alloy, is intact with all of the fasteners which crimp the flask together. It is decorated with concentric circles similar to those you see in the feet of metal vases.

The canteen had a padlock, suggesting that it was used to carry something more meaningful than the water or oil that legionaries carried with them on campaigns. By an extreme stroke of archaeological good fortune, the flask contains organic residue. Researchers were able to draw four samples of it during the conservation process. Analysis revealed that it was mostly millet with small quantities of blackberries and dairy. There are also traces of pitch from a conifer and plant material with high levels of oleanolic acid (olive or olive oil, I’d guess). All the ingredients had been heated or cooked together. This was almost certainly a food offering.