Archaeologists excavating the site of a new apartment building in Brig-Glis, south central Switzerland, have discovered remains of unexpectedly large and architecturally significant Roman-era buildings. Within an area of 8600 square feet, the team discovered the remains of two buildings and a commercial kiln.  Fragments of pottery vessels from northern Gaul date the buildings to between the 3rd and 5th centuries.

The largest of the two buildings had walls made of masonry and mortar. The excavation revealed a section of wall 30 feet long which means the building was of exceptional size for the time and place. It extends beyond the perimeter of the dig site. This is only the second Roman masonry building ever found in the Canton of Haut-Valais, and the other one was a very small sanctuary discovered during highway construction nearby.

The second building is more than 430 square feet in area. It had dry stone walls built with no mortar. A clay and wood building attached to it contained a kiln used in the production of lime.

The Simplon Alpine pass, today famed for its tunnel and the Orient Express train that runs through it, connects Brig-Glis with Domodossola in Piedmont, Italy. Emperor Septimius Severus had a mule track built over the pass in 196 A.D. and the Simplon Road brought Roman trade and cultural influence into what is now Valais.

Archaeologists believe that the newly-discovered buildings were agricultural outbuildings and artisanal workshops associated with a small settlement that grew on the Simplon Road. The scale and architecture of the structures and the quality of the imported ceramics found there indicates the area was far more Romanized than previously realized. 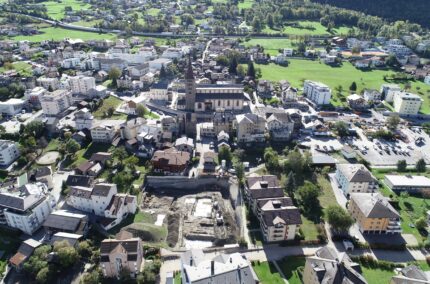