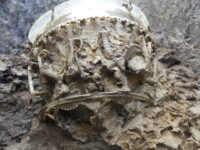 Archaeologists have discovered an exceptionally rare diatretic vase, a highly ornamented style of reticulated glass, in a paleochristian necropolis in Autun, central France. Only 10 complete examples of diatretic vases from the Roman era are known to have survived. This is the only one ever found what used to be ancient Gaul. The last one was found in the 1970s in North Macedonia.

This one is absolutely top of the line, inscribed above the elaborate decoration with the phrase VIVAS FELICITER (live in happiness). It is petite at 4.7 inches high and 6.3 inches in diameter. While it is damaged and there are many fragments, they have all been recovered and conservators will be able to stitch it back together.

Autun was founded as Augustodunum by the Emperor Augustus as the capital of the Aedui people in the 1st century A.D. The necropolis being excavated was built outside the city’s east walls in the early 3rd century and became Augustodunum’s main cemetery. Since excavations began this summer, more than 230 burials have been unearthed. There is a great diversity of burial types, including mausoleums, coffins with tile roofs, five massive sandstone sarcophagi and 15 lead coffins. One sandstone sarcophagus had a lead coffin inside of it. No inscriptions have been found to identify the dead of late ancient Autun.

The most grand sarcophagi contained appositely grand grave goods. A set of jet pins dating to the 4th century were found in burial 162, a pair of gold earrings in the lead coffin of a child and a gold ring inset with a cabochon garnet in the burial of a child or adolescent. A set of 4th century carved amber pins of such high quality and in such impeccable condition that there are no comparable groups in the archaeological record.

They were found at the feet of the individual buried in sarcophagus 43. That sarcophagus also contained a fragment with gold threads from a textile that has disintegrated, but its dye had leached from the textile leaving a tell-tale purple tint on the sediment. This is likely the fabled Tyrian purple derived from the murex sea snail. Another grave, grave 45, also contained a fragment of textile woven from gold threads.

The fine coffins and grave goods indicate that there were people of great wealth and status in Augustodunum. 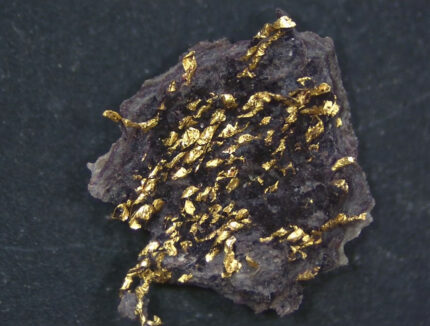