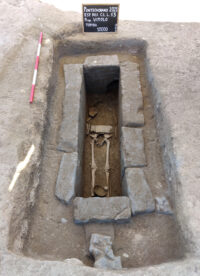 The tomb of a boy buried wearing a warrior’s bronze belt has been unearthed in the town of Pontecagnano, six miles from Salerno in the southwestern Italian region of Campania. The boy was between 10 and 12 years old when he died in the 4th century B.C. and was not a warrior quite yet, as evidenced by his young age and the absence of the spear typical of warrior burials in this period. Its association with the warrior class made the belt an important status symbol even if the deceased never fought a day in his life.

The stone-lined box tomb was discovered during a preventative excavation at the site of a new residential housing complex. Excavations at Pontecagnano began in 1962 when tombs from the ancient town’s necropolis, in use from the 5th century B.C. through the 3rd century B.C., were found during housing construction. Because the entire modern town was built over the vast necropolis, archaeological surveys done before construction work have been an uninterrupted source of archaeological material for 60 years. The boy’s grave is the 10,000th to be excavated from the Pontecagnano necropolis. 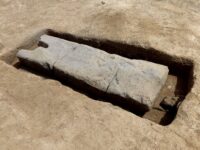 Box tombs are found frequently in this vast necropolis, but the stone is usually local travertine. The stone slabs that line this tomb are large, thick rectangular pieces of gray Campanian tuff, a material that was an expensive import at that time. The tomb’s cover, which was found in place and complete, was made of three pieces of the tuff. The stones that form the box and cover are finely modeled, the sides perfectly squared.

The skeletal remains of the boy are well-preserved from the pelvis to the feet. Unfortunately the upper body has suffered extensive damage, perhaps due to root growth, perhaps from animals interfering with the grave. In addition to the thick bronze belt worn around his waist, two intact black-glazed pottery vessels were buried at his feet. One held food. The other was a skyphos, a two-handled wine cup. The bronze belt and the skyphos are typical of inhumations from the Samnite culture. 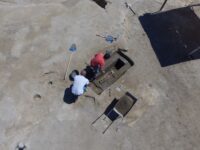 First settled around 5,000 years ago in the Chalcolithic, the Pontecagnano area was colonized by the Etruscans in the 8th century B.C. Etruria’s acquisition of territories in Campania put them in immediate proximity of Magna Graecia, the Greek colonies on the coast of southern Italy. They traded with their neighboring Greek colonies The Etruscan expansion put pressure on the Greek cities and their maritime trade networks, and when the Greeks drew Carthage into the fight, the Etruscans and Carthaginians formed an alliance on land and sea to muscle the Greeks out of the Tyrrhenian and Spain.

Carthage ultimately won out, but not so much its ally. Etruria’s power in Campania waned in the 5th century B.C. and the Samnites occupied the Salerno area after the Etruscans were defeated in battle by the Greek colony of Cumae and its Italic allies. By the late 4th century, the Roman Republic had taken control of much of southern Italy, and Etruscan Amina was replaced by the Roman town of Picentia in 268 B.C. where the Picentine people of northeast Italy were relocated after rebelling against Rome.