Archaeologists have unearthed a stucco head depicting the youthful Maya maize god in the Archaeological Zone of Palenque in Chiapas, southern Mexico. This is the first depiction of the maize god, one of the major deities of the Mayan pantheon, found in Palenque. It dates to the Mayan Late Classic period (ca. 700 -850 A.D.).

The stuccoed head was discovered last year during conservation work at The Palace, the ancient city’s central administrative and ceremonial complex. The excavation team was clearing fill from a corridor connecting House B with House F when they found an alignment of stones indicating deliberate placement. Just under a layer of soil, archaeologists found a receptacle containing the visage of the young maize god.

The sculpted face has a sharp chin with a cleft, prominent cheekbones, elongated eyes, parted lips and a wide nose. His forehead is flattened and rectangular, an elongated shape often seen in the skulls of Mayan elite who practiced intentional cranial deformation. Fragments of a tripod mount on which the stucco head was originally placed point to the offering have been presented almost like a severed head on a platter, a representation of the corn god found in codices and on artworks. 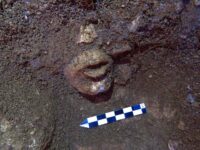 The face of the deity was oriented east to west indicating a deliberate deposition symbolizing the dawn and the corn growing when the sun kisses it. This was confirmed as the excavation progressed revealing that the head was part of a larger offering placed in a small pond with a stuccoed floor and walls.

According to Mayan cosmology, humans were created from corn so the maize god (dubbed Nal, the word for corn, by scholars even though the full name is not known) represented generative power. He also traveled through the underworld in a canoe, so Nal was associated the gateway to the afterlife as well. The offering was recreating Nal’s entrance into the underworld through an aquatic environment.

González Cruz explains that the archaeological context is the result of several events: the first consisted of the use of the pond as a mirror of water to see the cosmos reflected.

Later, perhaps in the reign of the latter, they shut that space in a symbolic way, breaking a portion of the stucco floor of the pond and removing part of the construction fill to deposit a series of elements: vegetables, animal bones, shells, crab, worked bone fragments, ceramic pieces, three fractions of miniature anthropomorphic figurines, 120 pieces of obsidian blades, a portion of a greenstone bead, two shell beads, as well as seeds and snails.

The placement of these elements was constituted concentrically and not by layers, covering almost 75% of the pit, which was sealed with loose stones. Some animal bones were cooked, and others had meat marks and tooth prints, so they were used for human consumption as part of the ritual, the researchers explained. A limestone slab with a small perforation — 85 cm long by 60 cm wide and 4 cm thick — was placed on top of the offering, but not before “sacrificing” the tripod plate, which was almost broken in half and a portion, with one of its supports, was placed in the hole in the slab.

Then came a semicircular bed of potsherds and small stones, on which the head of the deity was placed, which was supported laterally with the same materials.

Finally, the entire space would be closed off with earth and three small walls. This would have left the head of the young maize god inside a kind of box, where it remained hidden for around 1,300 years.

Because the head was found in a very damp environment, conservators are now drying it out in controlled conditions to ensure its long-term stability.