It could just be a phallic carving tool or some other kind of device, but it certainly looks like a penis. Archaeologists excavating a Mesolithic site in Motala, Sweden, found the suggestively carved antler bone (he he… I said bone) in an area replete with artifacts dating from between 4,000 and 6,000 B.C.

It’s rare that organic material survives over the millennia, but this particular site has ideal conditions for the preservation of bone artifacts: layers of sediment and clay riverbed that keep them safe from the elements. Bone and even wood artifacts have been found at the Motala site.

It’s not the first time that such a phallic object has been found from the ancient world. Another item strongly resembling a penis was unearthed in Germany in 2005. That one is even older – dating from 28,000 years ago – and made of stone.

Yet the recent discovery was enough to shock the scientists working at the dig, which is led by National Heritage Board archaeologist Fredrik Molin.

“Nobody here, and nobody that we heard of or talked with, had ever seen something like this in northern European or Scandinavian sites,” Gruber said. 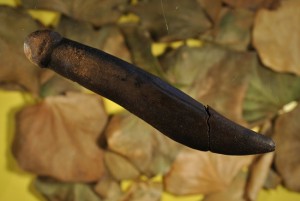 Since the non-penis end of it comes to a curving point, that could well have been the business end, used for carving or chipping flint. The site has revealed many other Stone Age tools with pointy uses, like harpoon and spear tips, so it would make sense that our penile friend would perform a similar function.