This year marks the 20th anniversary of the discovery of Otzi the Iceman. On September 19, 1991, tourists Helmut and Erika Simon stumbled on a mummified corpse lying on his front embedded in the ice of the Ötztal Alps, just 100 yards inside the Italian border. At first authorities thought he was recently deceased and thus dug him out in a slapdash manner, damaging him with jackhammers and allowing lookie-loos to collect pieces of his clothing and accessories.

It was only after he was sent to the morgue that people realized he was 5,300 years old, Europe’s oldest natural mummy. He’s been on display in the South Tyrol Museum of Archaeology since 1998, where a panoply of researchers study him, regularly releasing new information about his life and death.

This year, the museum plans a variety of events and new exhibits to celebrate the 20th anniversary, including a new state-of-the-art reconstruction model of what Otzi might have looked like. There have been earlier attempts using anatomical data and measurements. In 1993, National Geographic published a reconstruction done by anthropologically-trained artist John Gurche, but he didn’t have a 3D cast of the skull to work from, which is a major stumbling block to creating anything like an accurate facial reconstruction. Gurche had to use CT scans and pictures as the basis for his model.

Now Alfons and Adrie Kennis, two Dutch experts in anthropological reconstruction models have created a new model of Otzi to display at the South Tyrol Museum’s Otzi20 exhibit. They used the latest scientific information and an exact 3D copy of the skull created from the most recent X-rays and CAT scans.

This latest work by these artists, famous for their reconstructions, shows a denizen of the Alps from the Stone Age, striking in the lifelike nature of every detail, from his skin colour down to the smallest wrinkle on his brow: of medium height, slight yet wiry, with narrow, sharp features, an unruly beard and tanned skin.

He looks much older than the earlier reconstructions. He was 40 when he died, so he was at first depicted as a strapping middle-aged man. However recent findings suggest that Otzi would have been weatherbeaten and prematurely aged by the harsh environment of the Copper Age Alps, and that his eyes were brown, not blue as previously thought.

Here’s the new reconstruction on the left, the early 90s version on the right: 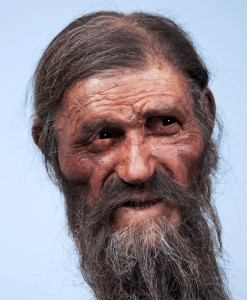 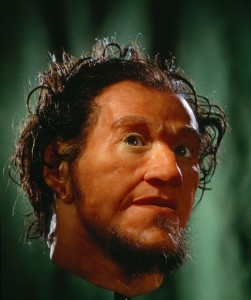