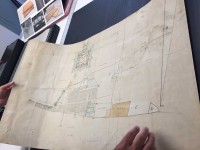 The University of Michigan’s Clement Library has acquired a previously unknown map of Detroit from 1790. The hand-drawn, hand-colored map entitled “Rough sketch of the King’s Domain at Detroit” was found in a home in Almonte, Ontario. The owner believed his grandfather had bought in the 1930s, but he didn’t know anything about it. He contacted experts to find out if it was an original 18th century piece as labeled and they confirmed that its authenticity. The owner wanted an educational institution to have the map so that it could be of use to students, teachers and researchers, and the University of Michigan was the ideal place for an early map of Detroit.

The map is 21-by-40 inches in dimension and shows Fort Lernoult, built by the British in 1779 and ceded to the United States in 1796, top center, its surrounding fields and defenses, the shipyard and associated Navy garden on the Detroit River and, just south of the fort, the grid lines of the early city which by then had a population of about 2,000 people. The town was protected east and west by wooden stockades running from the river to the fort. Drawn on watermarked 18th century paper, it dated September 1790 and signed by “DW Smith Actg Fort Adjutant.” That was Captain David William Smith, the son of Major John Smith, commander of the 5th Regiment of Foot at Fort Lernoult. Major Smith was the chairman of the land board of the District of Hesse (the section of English Canada that included the city of Detroit); his son was the secretary. 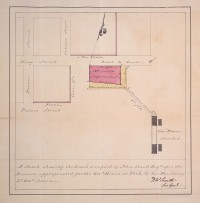 It wouldn’t be Captain Smith’s only foray into map-making. The Clement Library has another map of Detroit drawn by him, but he would really go pro once up north. Two years after he put pen to paper on the “Rough sketch of the King’s Domain at Detroit,” he was appointed deputy surveyor general by Canada’s Lieutenant Governor John Simcoe (the real life inspiration for the highly fictionalized and scenery-chewing villain on the AMC’s American Revolution series Turn: Washington’s Spies) and was elected to the 1st Parliament of Upper Canada. In 1798 he was appointed surveyor general of Upper Canada and the next year published A Short Topographical Description of His Majesty’s Province of Upper Canada in North America, with an annotated second edition published at Simcoe’s behest in 1813. He also managed to purchase 20,000 acres of land in Ontario that would form fully half of the original city of Toronto.

Brian Dunnigan, curator of maps and associate director of the Clements Library[:]

“This is a really special find because there aren’t any other maps that depict Detroit at this particular time period, which was about six years before the British peacefully evacuated the town and fort to make way for the arrival of United States troops.” […]

According to Dunnigan, who is an expert in early Detroit, Mackinac, Niagara and 18th-century Great Lakes history, and author of “Frontier Metropolis: Picturing Early Detroit,” the manuscript plan identifies the east and west boundaries of the “Domain,” an extra-wide ribbon strip of land that Antoine Laumet de La Mothe Cadillac, founder of Detroit, granted to himself in 1701.

The map includes many new details of the frontier city. Within the platted ground of the Domain is a very specific plan of the town, its defenses, and Fort Lernoult, constructed during the American Revolution and located (in modern terms) at the intersection of Fort and Shelby streets. It also includes proposed fortifications that were never constructed.

Due to a number of parcels of land bearing numbers, Dunnigan believes the map was once accompanied by a key or a report that has not yet been found.

The map will be the star of an exhibition at the Clement Library in 2017. 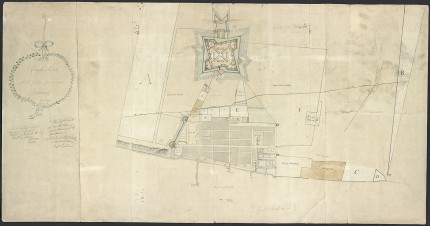