A gold wing from a pelican figurine has been recovered from the Douglass Beach Wreck off Vero Beach, Florida. The little right wing was found resting comfortably in a bed of crushed shell and is in excellent condition, completely with three sections of chain on a ring.

The wing is part of a gold statuette that was discovered in 2010 from the wreck of the Nuestra Señora de las Nieves, one of 12 ships in the Spanish treasure fleet that were lost in a hurricane in 1715. Diver Bonnie Schubert found the gold pelican using an underwater metal detector. 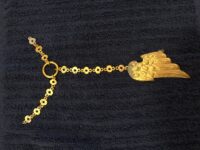 Made of 22 karat gold, the figurine is 5 1/2 inches tall and weighs 177 grams. The head and shoulders of the bird are connected to the tail and legs by hinges. Archaeologists believe it was a reliquary, because there’s a cavity between the top and bottom halves that would have held something like the relics of a saint, or  perhaps incense or a jewel. It would have been hung from its chains in a chapel, not been worn like jewelry. (The chain attached to the wing wasn’t a hanging mount; it connected the two wings of the statuette to the bird.)

At first it was thought to be an eagle, but scholars identified it as a pelican in piety. The pelican in piety was a symbol of Christ’s sacrifice, a popular motif based on the accounts of medieval bestiaries that pelicans draw their own blood to feed or revive their young. Here’s a version of the tale from Guillaume le Clerc’s Bestiaire written ca. 1210:

There is a wonderful thing about the pelican, for never did mother-sheep love her lamb as the pelican loves its young. When the young are born, the parent bird devotes all his care and thought to nourishing them. But the young birds are ungrateful, and when they have grown strong and self-reliant they peck at their fathers face, and he, enraged at their wickedness, kills them all. On the third day the father comes to them, deeply moved with pity and sorrow. With his beak he pierces his own side, until the blood flows forth. With the blood he brings back life into the body of his young.

Pelicans do not do any of this in real life, needless to say. This bestiary, like others of the epoch, wasn’t an attempt at recording natural history like Pliny, say, that missed the scientific mark a little, but rather a compendium of moral and theological lessons conveyed by animal stories, a sort of Christian Aesop.

Bonnie Schubert and her sole crewman, her 87-year-old mother Jo, searched for the missing right wing for two months at the find site and in different locations over the next two years, but were unsuccessful. A decade later, Capt. Henry Jones and crew member Tracy Newman followed in the Schuberts’ footsteps, exploring the waters off Douglass Beach on South Hutchinson Island near where the pelican had been discovered.

“Captain Jones and I were diving when his metal detector got a ‘ping. He brushed away some crushed shell, and the tip of the wing popped up. It was pretty and shiny and gold. He pulled the wing out of the sand, and things seemed kind of surreal. I was thinking, ‘This can’t be real,’ but at the same time I knew exactly what it was.”

Even more surreal, Newman had joked about finding the wing that morning.

“People have been looking for that wing since the bird was found 10 years ago,” Newman said. “We’ve looked for it numerous time. We had a huge map spread out on the floor of the condo trying to figure out where to go that day. I told Henry, ‘Let’s go find the bird wing.’ “ 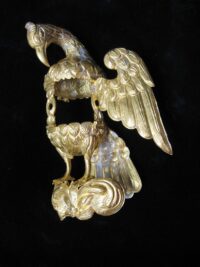 The gold pelican was sold to an anonymous private collector for $150,000 by 1715 Fleet-Queens Jewels LLC which owns the salvage rights to treasure fleet wrecks. The collector is ecstatic about the discovery of the missing wing and hopes to have the opportunity to acquire it. The state of Florida gets a percentage of the salvage and first dibs, so it’s not a foregone conclusion that the wing and pelican will be reunited. If they are, the collector is reluctant to reattach the wing as the parts are so delicate. Displaying them together would be enough for him.