A clay tablet inscribed with one of the first known proper names in history sold at auction last month for £175,000 ($229,000). The 3×3-inch baked clay tablet dates to around 3100 B.C. and is engraved in the archaic Sumerian pictographic script dubbed Uruk III. It was kept in the archive of the Temple of Inanna in Uruk in what is now southern Iraq, one of 77 pictographic tablets found there that were written by the same hand. 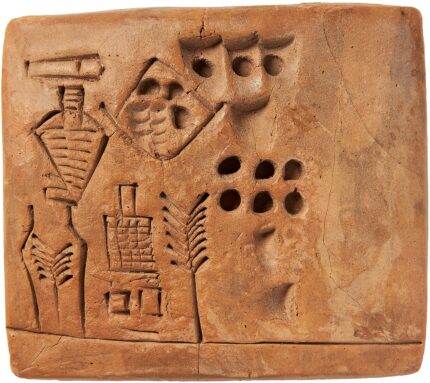 The topic of this administrative record is beer production. The pictograms take the reader through the process, starting with a sheaf of barley on the center bottom of the tablet. To its left is a brick building with a chimney (the brewery). To its left is a sheaf again now inside a vessel. The dots and lines are numbers which reveal the impressive scale of this business: 29,086 measures barley over 37 months were to be delivered to the temple. Taking receipt of the beer was one Kushim, represented by the symbols “KU” and “SIM” written in the upper left above the vessel with the barley sheaf.

There has been some scholarly debate over whether Kushim was a title rather than a proper name, but Kushim’s name appears on 17 other tablets, and some of those instances include the title “Sanga,” meaning temple administrator. So not only is Kushim one of the world’s first personal names written more than 5,000 years ago, but it might even be a signature as Kushim recorded his duties as administrator at the Temple of Inanna.

The tablet was most recently part of the epic Schøyen Collection, the largest private collection of writing materials in the world spanning 5,000 years of history. Norwegian shipping heir Martin Schøyen has been selling some of his collection over the past few years, and this very special lot was part of a selection on The History of Western Script sold by Bloomsbury Auctions in London in celebration of Schøyen’s 80th birthday.

It first emerged on the record in the 1950s when it was acquired by renown antiquities collector of Hans Erlenmeyer. The Erlenmeyer antiquities were sold at auction in 1988.  It was the Erlenmeyer sale with its collection of 78 5,000-year-old pictographic clay tablets that sparked Schøyen’s interest in adding archaeological primary sources to his collection. He was only able to acquire two of the tablets at the auction itself, but in subsequent years he collected whole groups of pictographic and cuneiform tablets. Schøyen acquired the Kushim Tablet in 1993 from Quaritch, rare book dealers who had bought it at the 1988 auction.

The rest of the 77 pictographic tablets from Uruk that were written by the same hand, possibly Kushim himself, are all in institutions — the Freie Universität Berlin collection, the British Museum, the Metropolitan Museum of Art, the Louvre. The Kushim Tablet is the greatest gem among the group and the only one of the 17 mentioning Kushim that was in private hands. It was bought by an anonymous US private collector.