The Havering Hoard, a cache of 453 Bronze Age objects dating to between 900 and 800 B.C. discovered in east London in 2018, was supposed to go on display for the first time at the Museum of London Docklands on April 3rd. Then COVID did its thing and this exhibition, like every other one in every museum in the country, was put on ice. The thaw is nigh, however, and Havering Hoard: A Bronze Age Mystery is now scheduled to open on September 11th and run through April 18th, 2021. All 435 objects in the hoard will be on display in the exhibition.

Britain’s third largest Bronze Age hoard contains a remarkably variety of objects, including axe heads, chisels, sickles, spearheads, blades, ingots, metalworking tools and two extremely rare terret rings (cart fittings to hold a horse’s reins), the first ones ever discovered in Britain. Among these stand-out objects is a piece that didn’t make any of the stories when the discovery was announced in 2019 or during promotions for the museum exhibition earlier this year. It is a razor, and a very marked

upgrade from the shell and stone blades that preceded it. It is double-headed making it look like a miniature version of a labrys, the Minoan double axe, eponym of the labyrinth built by Daedalus at the behest of King Minos for the palace of Knossos on Crete.

Archaeologists also suggest the razor was an important part of Bronze Age male identity – as much as riding implements and weapons – and was used not only in revealing the face and sculpting beards and moustaches but also in body modification.

Well, it is a sharp blade so the razor is technically a weapon, even if it was intended solely for use in grooming. A copper alloy tweezer was found with the double-headed razor, and it’s about the same size. 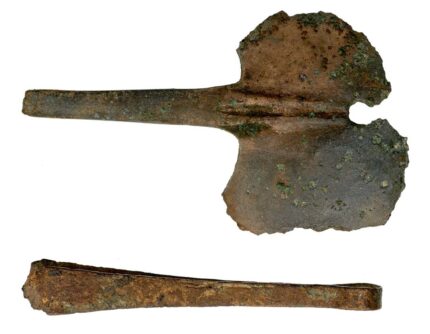 I’m guessing the razor blade was mounted on an organic handle that has now rotted away because that tiny axelet would be hard to wield without one.

To maintain safe distancing, all entry tickets to the museum are time and must be booked in advance. Book your free ticket here.