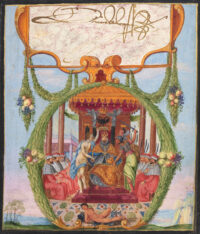 The Herzog August Bibliothek library in Wolfenbüttel, Germany, has acquired a 400-year-old illustrated album signed by the crowned heads of Europe for €2.8 million (about $3.1 million). It’s a purchase that has been on the library’s wish list since 1648. That first offer was declined. Three hundred and seventy-two years later, the second offer was accepted.

The “Album Amicorum” (friendship book), aka the “Große Stammbuch,” was put together by Augsburg art dealer and diplomat Philipp Hainhofer over 50 years of travels through the courts of Europe. As he brokered the sale of luxury goods to his aristocratic clientele between 1596 and 1647, he would ask them sign his friendship book. Contributions went far beyond autographs, Hainhofer commissioned elaborate illuminations to go with the signatures and inscriptions. Well-known artists, mostly from his hometown in Augsburg, filled the pages with rich decoration, the higher the status of the signatory, the more elaborate the illustration. 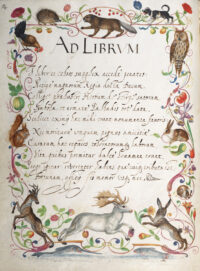 Even in its own time it was famous for the quality of its illustrations and the incredible array of contributors. Signatories include Holy Roman Emperor Rudolf II, another HRE Matthias, Christian IV of Denmark and Norway, Cosimo II de’ Medici, Grand Duke of Tuscany, Duke Wilhelm V of Bavaria, Frederick V, Elector Palatine and his wife Elizabeth Stuart, daughter of James VI of Scotland/James I of England, and grandmother of the first Hanoverian king of Britain, George I.

Friendship books were a popular trend starting in the 16th century. People would use them to record information about their friends and families, or even people they’d just met once but who made a strong impression. Students at Wittenberg University in the 1530s used them as yearbooks, passing them around to get signatures, crests, dedications, poems from each other and their professors. The more renown the scholars, the more cachet attached to the book. The practice continued in the halls of German academia into the early 19th century.

Hainhofer started his friendship book when he was a college student. When his business put him in contact with people of high rank, he asked them to sign. Those clients provided a conduit to people of even higher rank, and as the book’s contributors represented the heights of court society, the book itself gave Hainhofer access to rarified circles which gave him invaluable aid in his cultural and diplomatic endeavors.

After Hainhofer’s death in 1647, August the Younger of Braunschweig-Lüneburg, a long-time friend and correspondent of Philipp Hainhofer’s and one of the signatories of the book, tried to buy it from the son and heir for the library August had founded in Wolfenbüttel. That was the last documented trace of the masterpiece until it reemerged at an auction in New York in 2006. Unbeknownst to researchers at the time, it turns out to have been sold in London in 1931 and then again in the 1940s to bibliophile Cornelius Hauck in Cincinnati.

At the 2006 auction, it was acquired by a British private collector and went back across the ocean. This year that collector contacted Sotheby’s to sell Das Große Stammbuch. The auction house’s experts traced its history and discovered its connection to the Herzog August Bibliothek. Sotheby’s contacted the library which was thrilled to repatriate this unique record of Early Modern European art, politics, trade and diplomacy. The book will be researched thoroughly for the first time in its long life, digitized and made freely available to the public. 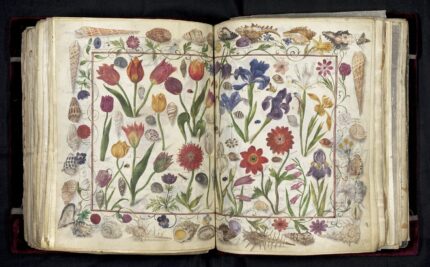