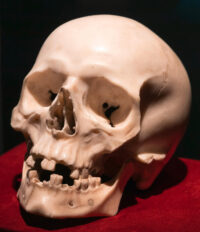 A marble skull by Gian Lorenzo Bernini in the Dresden State Art Collections has been subjected to forensic anthropological analysis, an approach made possible by Bernini’s meticulous attention to lifelike anatomical detail in notable contrast to the stylized depictions of skulls and skeletons commonly found in Renaissance and Baroque art. This is the first forensic anthropological examination of a sculpted art work.

Commissioned by Fabio Chigi three days after his election to the papacy as Alexander VII in 1655, the skull was small in dimension but immensely important to Bernini’s career as it marked his return to papal patronage after a long career eclipse in the 1640s when he fell out of favor with Pope Innocent X over family politics and accusations that Bernini had botched construction of the bell towers of Saint Peter’s Basilica. By the end of 1655, Bernini returned to Saint Peter’s in triumph, engaged by Alexander VII to design the square in front of the basilica and the massive colonnade representing the embracing arms of Mother Church.

Bernini’s Death’s Head is a masterpiece of realistic hard stone carving. The life-sized skull was carved in the round from a single piece of white Carrara marble, with the mandible and cranium connected at the temporomandibular joints. It is so anatomically correct that researchers were able to study the carving to determine sex, age, pathology and ethnic origin of the subject just as if it were a real human skull.

“It appears that Bernini used a real biological skull as a model, as he captured details that depicted an adult male of European ancestry,” says corresponding author James T. Pokines, associate professor of anatomy and neurobiology.

Pokines used standard forensic anthropological techniques as would be done with a biological skull. These include scoring morphological traits for sex and ancestry and performing standard cranial measurements with calipers.

They found the skull is so detailed that it includes many precise anatomical features that could be examined in the same manner as a real skull. Bernini even depicted irregularities common to real skulls such as left/right asymmetry, common variations such as in the shape of a suture and tooth loss both before and after death.

That’s only scratching the surface of how much detail Bernini put into this skull. He carved, drilled and polished the stone to include foramina (hole through which nerves and blood vessels pass through bone) and the gaps between the upper and lower jaws. All of this was likely done without his usual preparatory sketches and wax models, simply because there was no point in creating artificial models when he had an actual human skull to use.

There have been repairs over the years. Bernini’s original high-finesse joined mandible had to be reattached at some point with a cement and two iron rods. This “restoration” damaged the skull, drilling into both sides of the mandible causing fractures and marble loss from teeth to cheekbones to nose to eyes. 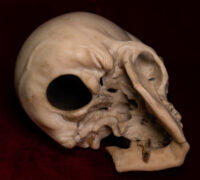 Bernini’s marble skull isn’t a perfect replica. The foramen magnum in particular stands out because it is significantly larger than it usually is in a human skull. This was a necessary artistic decision rather than an error. The enlarged foramen was an access point through which Bernini was able to hollow out the inside of the skull. He sacrificed the precise accuracy of the dimensions of the foramen, which after all would never be visible when the skull was on display, to achieve greater realism by hollowing out the interior of the skull.

The study has been published in the journal The Seventeenth Century and can be read in its entirety here.