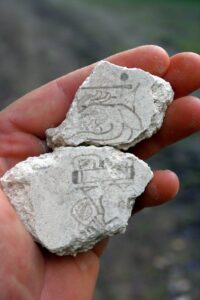 Archaeologists have discovered the earliest confirmed example of Maya calendar notation on two fragments of plaster at the Maya site of San Bartolo, Guatemala. The paint-on-lime-plaster fragments feature a dot and a horizontal line over the head of a deer. This is “7 deer,” one of the days of the Maya calendar. Radiocarbon dating of charcoal found next to the plaster returned a date range of 300-200 B.C.

“The Maya had a solar calendar, like us, but they also had a ritual one,” says Hurst. “We also have one, as Easter is part of that sequence of rituals throughout the year,” she adds. It was associated with a creation myth and also to mark the celebrations that accompanied the Haab, the 360-day calendar. The remaining five days, although they were counted, were disastrous and people avoided leaving their homes. Surrounding both was the Calendar Round, which completed its cycle every 52 years. The complex way that the Maya had to organize time was completed with the Long Count, a vigesimal system (base 20) of counting the days linearly. It is with the latter that it has been possible to find equivalencies between the Maya calendar and the Gregorian calendar.

San Bartolo made global news in 2001 when archaeologists discovered vividly painted murals from the Late Preclassic period (400 B.C. to 200 A.D.) in its central stepped pyramid, dubbed Las Pinturas after the colorful wall paintings. Ceramic artifacts dated them to around 100 B.C., the penultimate of seven construction phases of the pyramid. The calendar hieroglyphics date to the third phase.

During the third phase of construction, the central pyramid was smaller. When it was expanded, walls had to be knocked down. Archaeologists discovered more than 7,000 pieces of plaster, remnants of the destroyed walls. They were disposed of carefully, not simply thrown away as construction debris. The former walls were deliberately deposited inside the newly-enlarged chamber, a sort of symbolic burial of the sacred imagery and text.

The study of the find has been published in the journal Science Advances and can be read in its entirety here.

One thought on “Earliest Maya calendar fragment found in Guatemala”