Archaeologists refurbishing the Villa Adriana in the ancient Roman city of Stabiae on the Bay of Naples have uncovered an exceptionally well-preserved section of the villa’s water system. It consists of a large lead tank with conduits leading in and out, used to regulate the flow of water through the rooms of the villa. There are even stop keys still in place. It is shocking how plausibly modern it looks.

Like its neighbors Pompeii and Herculaneum, Stabiae was destroyed in the eruption of Vesuvius in 79 A.D. and only began to emerge from under the hardened volcanic rock when tunnelers seeking portable treasures for the Bourbon rulers of Naples reached it in the 18th century. Unlike its neighbors, Stabiae was an exclusive enclave for the wealthy. Built on the slopes of a hill overlooking the Bay of Naples, at least a dozen large mansions have been unearthed at Stabiae, all of them richly appointed and lavishly decorated with frescoes and mosaics. These were known as “Otium” villas, meaning leisure or idleness. Only the richest and most important members of the Roman aristocracy could afford one.

Villa Arianna, named for the vividly-colored fresco of Ariadne abandoned by Theseus found in one of the two triclinia (dining rooms), is the oldest mansion in Stabiae. Its oldest areas — the atrium and surrounding chambers — date to the late Republican period, the beginning of the 1st century B.C. The last additions were made in the Flavian era (69-96 A.D.), but Vesuvius narrows down that date range to the first decade. The villa is famed for the exceptional quality of the frescoes on its walls, including extremely rare examples painted in the first half of the 1st century B.C., a very early phase of the second Pompeian style (ie, in imitation of architectural features).

The lead tank was first identified ten years ago, but only now is it being brought back to light during works to clear out the small peristyle garden of the villa. It is notable for its pristine condition and unusual decoration as well for being still in situ, giving archaeologists new information about how the villa’s plumbing and heating systems worked. 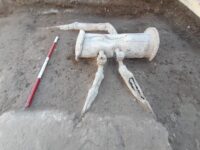 Connected to the central piece, two pipes emerged that fed the thermal plant of the villa and the water feature that probably embellished the impluvium (the central water collection tank) in the atrium.

Finally, the decorations adorned the structure which had to be partially visible, to allow access to the two stop keys that allowed to regulate the flow of water or to close it completely to allow maintenance operations of the systems.

“A tank like this, with its stop keys, is part of that type of systems and preparations that may seem almost modern as they are made and that have always aroused amazement since the first discoveries in Stabia, Pompeii and Oplontis. The ancients also in this case they have not renounced an ornamental element, a relief of an astragalus plant, which perhaps characterized the workshop that produced it, like a modern brand, and which in any case had to be visible, since the tank was placed at the above the floor level. A further example of how accessibility, knowledge and protection are integrated, which we will tell the public during construction in the context of the open construction sites of the Park. “- underlines the Director Gabriel Zuchtriegel. 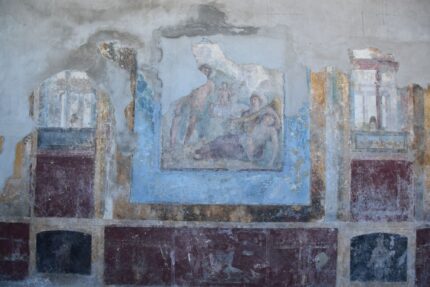