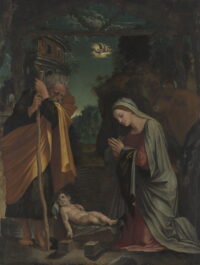 An extremely rare 16th century Nativity by Baldassare Tommaso Peruzzi has been acquired by the National Museums NI, saving it for the UK after an temporary export bar prevented it leaving the country. The £277,990 necessary to buy the piece were raised from contributions by the National Heritage Memorial Fund, Art Fund, Department for Communities NI and the Esme Mitchell Trust.

Peruzzi was a Sienese painter who worked in the Rome in the early 16th century and was a peer and collaborator of Old Masters Raphael and Bramante. He was a true Renaissance man, an able architect, draftsman, theater set designer and painter. Peruzzi was considered an accomplished and innovative architect and artist, employed by the elite of Rome including Popes Julius II and Paul III. He was so highly esteemed by his contemporaries that he was buried in Rome’s Pantheon next to Raphael.

Most of his paintings were frescoes and have been lost to history, and what few painted works of his have survived are in Italy. The Nativity is the only one in the UK.

Painted on wood panel around 1515, the Nativity is depicted as a night scene, an unusual approach for the period. Peruzzi’s innovations in this work — the nocturnal setting, the side lighting — would be adopted a decade later by the likes of Parmigianino, marking it an important transitional piece in the art of Renaissance Italy. It also illustrates Peruzzi’s keen understanding of ancient architecture in the curved façade of its ruined folly behind Joseph.

The painting is currently undergoing conservation at the National Gallery in London.

Anne Stewart, Senior Curator of Art at National Museums NI said:
National Museums NI is delighted that this remarkable painting will be part of our collection which has been made possible with the help and generosity of our partners and funders. Currently, there are no High Renaissance paintings in any public collection in Northern Ireland, so this is truly a Christmas gift to our audiences. We look forward to welcoming visitors to the Ulster Museum when it goes on display in 2023.