Conservators have discovered that the red ink on the set of 16th century hand-drawn maps of the Spanish Armada’s failed invasion of England is of far more recent extraction. They look integral and original, but all of the red accents — ships on fire, city markers, compass points — were added in the late 19th century to enhance the maps’ salability.

The 10 maps in the set are the only surviving contemporary drawings depicting the progression of naval battles that led to the scrappy English fleet’s surprise defeat of the much larger and more powerful Spanish Armada in 1588. They were drawn by an unknown Flemish artist in 1589. 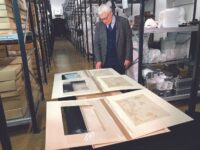 They were sold by the Astor family to a private US collector in 2020, but the Ministry of Culture barred their export because of their unique historic importance. The National Museum of the Royal Navy (NMRN) was able to raise the funds to acquire them and keep them in Britain. The museum sent the set to the National Archives in London for study and conservation.

Initial examination found that the maps were in good condition, with only a few areas of mold repair and water damage from a flood at Hever Castle, in the 1960s.

Non-invasive tests including x-ray fluorescence spectroscropy revealed Flemish watermarks, which, with some marginal notes, suggests a craftsman probably working in London at a time when the Flemish were recognised as the best cartographers in Europe. The iron gall ink was 16th century and in good condition despite slight fading and paper corrosion—but the surprise was the reds, only available from the late 19th century. “The only possible conclusion was that the original maps were not coloured,” says Natalie Brown, the senior conservation manager at the National Archives. The work has implications for hundreds of antique maps in their own collections.

At the museum, curator Annabelle Cameron says that, while 300 years of their history remains unrecorded, by the early 19th century the maps were owned by Roger Wilbraham, the collector and MP—and may always have been in his family—and were seen by the British Library in 1828. They were sold by Sotheby’s in 1899 to the bookseller J. Pearson and Co, who sold them in turn to William Waldorf Astor in 1903. Either could have added the coloured ink to make them more attractive, which Brown said was common practice at the time. It certainly helped bump up their price: Pearson paid £30 for the maps and sold them for £90.

The maps are still undergoing conservation, but conservators have deemed them stable enough to go on public display. Only two have been exhibited since the purchase, and those were in Liverpool. The National Museum of the Royal Navy in Portsmouth plans to exhibit all ten of them together in the near future.