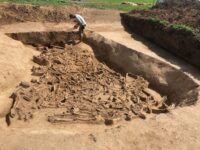 More than three dozen headless skeletons have been unearthed in a mass grave at a Neolithic settlement in Vráble, Slovakia. Archaeologists discovered the remains of 38 individuals, all but one of them, a young child, were missing their heads.

The Vráble-Ve`lke Lehemby site contains three settlements from the Linear Pottery Culture (5,250-4,950 B.C.). The villages were occupied around 5110 B.C. and a geophysical survey identified 313 dwellings within the boundary lines of the three villages. That makes Vráble one of the largest Early Neolithic settlements in Central Europe. Not all of the homes were inhabited at once. At its peak of population, there were about 600 people living in 80 homes, which is a very large community for the Early Neolithic.

The village to the southwest was encircled by a double ditch with palisades that marked its boundary line. The skeletal remains were found inside the ditch.

One on top of the other, side by side, stretched out on their stomachs, crouched on their sides, on their backs with their limbs splayed out – the position of the skeletons does not suggest that the dead were carefully buried. Rather, the positions suggest that most of them were thrown or rolled into the ditch. All of them, with the exception of one infant, are missing their heads, including their lower jaws. “In mass graves with an unclear positioning, the identification of an individual is usually based on the skull, so for us this year’s find represents a particularly challenging excavation situation,” says Martin Furholt. […]

“Several individual bones out of anatomical position suggest that the temporal sequence might have been more complex. It is possible that already-skeletonised bodies were pushed into the middle of the trench to make room for new ones,” elaborates Dr Katharina Fuchs, an anthropologist at Kiel University. “In some skeletons, the first cervical vertebra is preserved, indicating careful removal of the head rather than beheading in the violent, ruthless sense – but these are all very preliminary observations that remain to be confirmed with further investigation.” 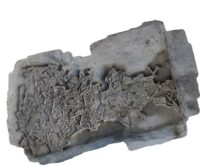 The first cervical vertebra still attached to the skull points to post-mortem removal of the head some time after death when the body had begun to decompose. It’s not clear if the deceased were elsewhere during those few weeks or if they were in the ditch the whole time and dug up for the head removal.

This is not a burial practice that has been encountered before in Linear Pottery settlements. Some time around 5000 B.C. a major shift occurred that led to the abandonment of ancient settlements and the founding of new ones. This marked a transitional period before the final disappearance of Linear Pottery culture around 4900 B.C. Funerary rituals also changed in this time. After centuries of relatively uniform burial styles, new rituals were introduced, including partial inhumations and burial in settlements rather than cemeteries.

An interdisciplinary group of researchers will study the skeletons employing archaeological DNA analysis, radiocarbon dating and stable isotope analysis to answer questions about the dead — age of death, whether they were raised in the area or came from somewhere else, any familial relationships, their diet, illnesses and possible causes of death.