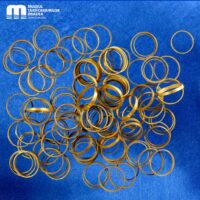 A prehistoric hoard that is unique on the European archaeological record has been unearthed near Oradea in western Romania. Archaeologists discovered the Copper Age grave of a woman during construction of a new highway connector this spring. It contained 160 gold rings, two gold beads, 800 bone beads and a multi-spiral copper bracelet. Before this discovery, the total number of gold artifacts found in the entire Carpathian Basin (consisting of large parts of modern Hungary, Slovakia, Poland, Ukraine, Romania, Serbia, Croatia, Slovenia and Austria) was only 150 pieces. That figure has now more than doubled in one fell swoop. 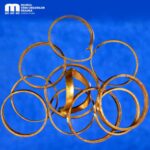 The remains are currently undergoing radiocarbon dating, but the objects mark the woman as member of the local Tiszapolgár culture which flourished in Eastern and Central Europe between 4500 and 4000 B.C. Given the exceptional luxury of her funerary jewelry, she must have been someone of very high status.

The gold rings were found at the head of the burial and would have adorned her hair. Their total weight exceeds 200 grams (.44 pounds), which is an enormous amount considering it was alluvial gold, ie, painstakingly separated from the sand of a river via a washing process rather than mined in large quantities from veins of ore.

The gold, beads and bracelet are in the process of being cleaned and conserved. Researchers are hoping to be able to determine the geographic origin of the gold, to pinpoint if it was local or imported. Scientists in Romania and the Netherlands will help perform further analyses including DNA extraction. When studies and conservation are completed, the hoard will be exhibited to the public at the Ţării Crisurilor Museum in Oradea.