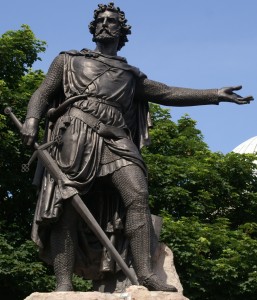 Researcher Dr. John Reuben Davies of Glasgow University has found a previously unnoticed reference in the pipe roll, a financial record of King Edward I’s exchequer, for fiscal year 1304-1305 that gives an account of William Wallace’s crimes, death and the disposition of his body parts. Discovered in the National Archives at Kew, the document describes Wallace as “a robber, a public traitor, an outlaw, an enemy and rebel against the king, who in contempt of the king had, throughout Scotland, falsely sought to call himself king of Scotland ….”

This is the first explicit reference found to Wallace seeking the kingly crown. The Scottish sources take pains to emphasize that Wallace never declared himself king or even aspired to the crown. The extant documents we have that were signed by Wallace himself all specify that he takes action in his role as Guardian of Scotland on behalf of imprisoned King John Balliol. Until now, the English sources didn’t say otherwise. This record being an internal financial document not intended for public viewing makes it more likely to be an honest view of the English powers instead of a propaganda exaggeration used to justify the brutal execution of a Scottish hero.

Dr. Davies thinks it may have been the result of a misunderstanding. Wallace was declared Guardian of Scotland by nobles including Robert Bruce after his victory in the Battle of Stirling Bridge in September 1297. At first he shared the role with Andrew de Moray, but de Moray died just two months later from wounds incurred at Stirling, leaving Wallace as sole Guardian until shortly after his defeat at the Battle of Falkirk a year later. As Guardian, he issued edicts, commanded the army, and had the right to bear the Scottish National Standard and appoint bishops. The Guardian is basically the acting king, and when the king he acts for is a) imprisoned and b) widely considered a spineless shill (Balliol’s nickname meant “empty shirt”), you can see how the English, unfamiliar with the constitutional role, might have seen Wallace as a pretender for the Scottish crown.

The pipe roll’s entry on Wallace is also the earliest description of his execution. Pipe rolls were accounts drawn up by the office of the exchequer which tracked the moneys sheriffs were tasked to pay to the king each year. The sum would be reduced based on expenditures undertaken by the sheriffs on behalf of the crown, like tax deductions, basically. In this case, the accounts deduct the sums the sheriff spent moving William Wallace’s quartered body parts to Scotland to put on display as a gruesome warning against rebellion. Wallace was executed in London on August 23, 1305. The pipe roll covers the accounting period of Michaelmas (the feast of St. Michael, celebrated on September 29th) 1304 to Michaelmas 1305, so it was drawn up within months of Wallace’s death, maybe even a single month after, depending on how promptly they started working on their accounts after the close of the fiscal year.

The entry describes Wallace as “by sentence of the king’s court at Westminster drawn, hanged, beheaded, his entrails burned, and his body quartered, whose four parts were dispatched to the four principal towns of Scotland. This year, 61 shillings 10 pence.” This level of detail is unique in a dry financial accounting ledger like a pipe roll. Other executions are recorded in earlier rolls, but it’s basic names and dates stuff, not the gory details of the accusations and executions. It underscores that even to accounting clerks William Wallace’s crime and punishment stood out as worth noting, enough so to include a narrative of them in what would otherwise have been the medieval equivalent of a payroll spreadsheet.

7 thoughts on “English source: William Wallace wanted to be king”