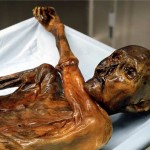 The Tyrolean Iceman known as Otzi died in the Alps 5,000 years ago, but despite his relative youth, scientists have discovered that he has no genetic descendants.

In the new study, the researchers took advantage of advanced genome-sequencing technologies to shed more light on the Iceman’s genetics. They sequenced his entire mitochondrial genome and compared that sequence to other published human mitochondrial DNA sequences to construct his evolutionary (or phylogenetic) family tree.

“The surprise came when we found that the lineage of the Iceman did not fit any of the three known K1 clusters,” Rollo said. His team has informally named the newly discovered branch on the human family tree “Otzi’s branch.”

This is unexpected news. He’s not all that old, really. You’d think there’d be some direct genetic link between him and modern Europeans, but nope.

It seems he was a member of a genetic group that is extinct now, or at least so rare that scientists have yet to find it.

14 thoughts on “No living relatives for Otzi”