Vikings were known to have traveled extensively in the unfriendly waters of the North Atlantic, perhaps reaching as far as North America. How was it possible, in a time before the invention of the magnetic compass (in Europe, at any rate; they had magnetic compasses in Han Dynasty China (2nd c. B.C. – 1st c. A.D.), for sailors to navigate even under consistently overcast conditions when you can’t see the sun during the day nor the stars at night?

According to medieval Icelandic sagas, Vikings navigated using a sunstone, a mineral that polarizes light and thus allows the sun to be found even through heavy cloud cover. A passage in the 12th-13th century Rauðúlfs þáttr (pdf) saga describes its use:

The weather was overcast, and snow was falling, as Sigurður had predicted. The King then summoned Sigurður and Dagur into his presence. He sent a man out to observe the weather, and there was not a patch of clear sky to be seen. The King then asked Sigurður to determine how far the sun had travelled. He gave a precise answer. So the King had the sun-stone held aloft, and observed where it cast out a beam; the altitude it showed was exactly as Sigurður had said.

The sólarsteinn is mentioned in other sagas as well, described as a great treasure, and appears in several inventories of church property during the 14th and 15th centuries. None of the sources specify what mineral the sunstones were, however. There have been various likely candidates (cordierite, iolite, feldspar) since 1969 when Danish archaeologist Thorkild Ramskou first proposed that sunstones were real minerals with polarizing properties rather than legendary talismans with supernatural powers. 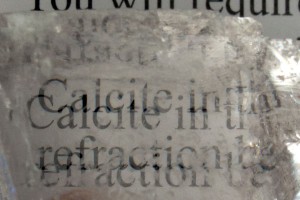 A new study led by University of Rennes physicist Guy Ropars found that a transparent calcite crystal known as Iceland feldspar, aka Iceland spar, can indeed find the sun through the clouds and with a remarkable degree of accuracy. They used a piece of spar that was recently recovered from a British shipwreck from 1592.

In the laboratory, Ropars and his team struck the piece of Iceland spar with a beam of partly polarized laser light and measured how the crystal separates polarized from unpolarized light.

By rotating the crystal, the team found that there’s only one point on the stone where those two beams were equally strong—an angle that depends on the beam’s location.

That would enable a navigator to test a crystal on a sunny day and mark the sun’s location on the crystal for reference on cloudy days. On cloudy days, a navigator would only be able to use the relative brightness of the two beams.

The team then recruited 20 volunteers to take turns looking at the crystal outside on a cloudy day and measure how accurately they could estimate the position of the hidden sun.

Navigators subdivide the horizon by 360 degrees, and the team found that the volunteers could locate the sun’s position to within 1 degree.

Even after the magnetic compass was invented in Europe in the 1300s, the feldspar was still an important navigational tool, hence its presence on an Elizabethan ship a full four centuries after the end of the Viking era. The study found that even a single cannon from the shipwreck interfered with the compass by as much as 90 degrees. Therefore they couldn’t rely on the compass data alone. If the sun was obscured, a sunstone was crucial to avoid drastic navigation errors from a magnetic compass on a ship laden with cannon.

You can see the neat double refraction effect of Iceland spar in this video: