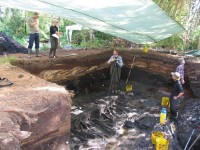 In 2009, students from the University of Aarhus found the remains of more than 200 Iron Age warriors scattered in the Alken Enge wetlands in East Jutland, Denmark. Human remains had been found before in the bog by ditch diggers in 1944-45, and extensive excavations led by archaeologist Harald Andersen between 1957 and 1962 unearthed a number of human bones, mainly large bones like pelvises and skulls, all from young adult males and many of them showing signs of damage from weapons. Andersen concluded that the bones belonged to enemy warriors sacrificed after a military defeat. Radiocarbon dating indicated the warriors had died sometime around 1 A.D.

The Aarhus excavation used Andersen’s excellent documentation when they returned to the site in 2009, so they were expecting to find more of what he had found. They were not disappointed. The large number of remains, however, was unexpected and unique in the Danish archaeological record.

The Alken Enge wetlands form where the Illerup River flows into Lake Mossø. The river valley is also known as the “Holy Valley” because of the large number of sacrificial sites that have been found in the area. The people living there during the Iron Age regularly performed ritual sacrifices in various places in the valley, mostly offering pottery and wooden artifacts. The Alken Enge sacrifice, however, is an entirely different mold. The sheer numbers of bones indicate a massive event took place approximately 2000 years ago. (Incidentally, I mentioned in the 2009 entry that weapons had been found sacrificed at a nearby site. They’ve been dated to around 200 A.D., so they definitely did not belong to these warriors.) 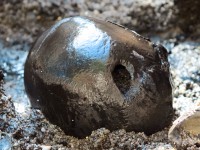 After securing a grant of 1.5 million Kroner (about $250,000) from the Carlsberg Foundation, a team of experts from the Skanderborg Museum, the Moesgård Museum and Aarhus University returned to the wetlands this summer. They reopened the 2009 pit and dug some new ones, finding more skeletal remains with wounds of war. One skull has a large hole in the back from a spear or projectile. One thighbone was found hacked in half. They also found weapons, like spears, clubs, shields and a wonderfully preserved axe about 2.5 feet in length with the entire wooden shaft still intact, courtesy of the miracle of peat. (Weapons have been discovered before, but only a handful of lance heads and a wooden shield, so researchers don’t think they were systematically sacrificed.)

Hoping to get an idea of just how large the sacrificial ground zero might be, archaeologists have dug test pits at numerous points over the 40 hectare range of the Alken Enge wetlands. All returned human remains, which means the potential total number of warriors sacrificed could easily reach into the thousands.

“It’s clear that this must have been a quite far-reaching and dramatic event that must have had profound effect on the society of the time,” explains Project Manager Mads Kähler Holst, professor of archaeology at Aarhus University. 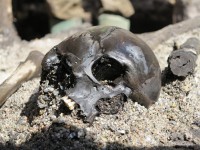 Some of the bones and teeth are in such excellent condition that DNA has been extracted from them. In preliminary tests, there was insufficient recoverable DNA in the femurs, but scientists were able to extract a testable sample from the teeth. That dental DNA might be able to tell us where these warriors came from. If they were local, their DNA should basically match that of today’s Scandinavians. If there are notable differences, that might indicate the sacrificial victims came from the south.

It’s unlikely to be Romans. Although Roman armies were very much on the move around 2000 years ago, they never did get as far north as Jutland. They did put a great deal of pressure on the Germanic peoples north of the Alps, however, which could in turn have caused conflict between the Iron Age Danes and the Germans. Continued study of the bones could potentially fill in all kinds of blanks in our knowledge of this period’s military and social history.