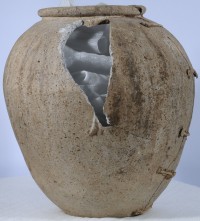 A huge Roman coarseware pot discovered on private property in Highworth, near Swindon, in June of 2008 will be going on public display for the first time. The Swindon Museum and Art Gallery bought the pot, known as the Highworth Ceramic, at auction in March 2009 for £740 ($1176) and will put it on display this month after years of research and conservation.

The pot was found along with some other Roman artifacts during the construction of a garage on Cricklade Road. It was damaged — a large chunk was missing from the side — but its sheer size made it notable. It’s 24 inches tall and 18 inches wide. The mouth is a full foot in diameter. Its dimensions alone made recovering it a challenge. With much effort, experts got it out of the ground and transported the monster to the Wiltshire and Swindon History Centre for condition assessment. 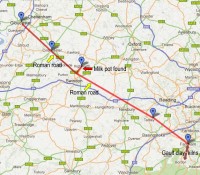 As the size should indicate, the pot was used for storage. It’s British-made coarse sandy pottery classified as Roman Alice Holt/Farnham ware after the Alice Holt Forest and the town of Farnham where pits of grey gault clay provided the raw material for numerous kilns in the area. Conveniently located less than 15 miles from the Roman road connecting Silchester (Calleva) to Gloucester (Glevum), manufacturers produced industrial quantities of domestic pottery from about 100 A.D. until the early 5th century. Part of that same Roman road, now called Ermin Street, passes through Swindon just four miles from Cricklade Road where the pot was discovered. 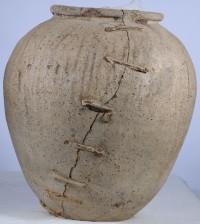 Although this type of pottery was more of a cheap workhorse than, say, high quality Samian Ware, a pot this size would have been difficult to make on the wheel and difficult to fire without breakage, so it would have been costly to produce and expensive to buy. So much so, in fact, that even if two giant cracks developed from top to bottom, it would have been worth repairing them. That is just what the Roman owners did. They stapled the cracks together with horizontal strips laid outside and inside the pot. They look just like stitches, giving the pot a rakishly Frankensteinesque style. 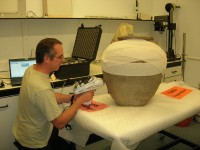 The Objects Conservation team at the Wiltshire and Swindon History Centre enlisted the aid of Dr. Phil Parkes from Cardiff University, who used X-ray fluorescence to determine what metal the staples were made out of. The analysis proved the staples were made out of lead (traces of iron were also present, but their likely source was dirt clinging to the staples). Lead staple repairs are well-documented in the archaeological record of Roman Britain, although more frequently seen with expensive Samian Ware. 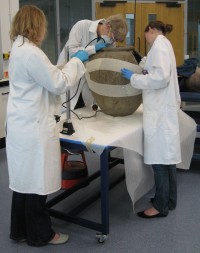 Conservators also found a black residue inside the pot. Val Steele from the University of Bradford, assisted by Wiltshire Conservation Service conservators, collected samples of the residue for analysis and found it was the blackened remains of ancient milk. Later the pot was also used to store dry goods. Initially experts thought the pot dated to the 3rd or 4th century, but the residue analysis indicated that it was first put to milky use in the late 1st or early 2nd century.

According to Wiltshire and Swindon History Centre conservator Beth Werrett — who, by the way, hooked us up with these gorgeously huge pictures from the Wiltshire Council Conservation and Museums Advisory Service to do the gorgeously huge pot justice — the presence of the milk residue is a rare survival. Also rare is a pot this size that is as complete as it is. Also rare are the well-preserved stitches, all the more impressive for their large scale.