Archaeologists excavation the site of an ancient volcanic eruption in Gunma Prefecture, 70 miles northwest of Tokyo, have found the well-preserved remains of man in armor. He was trapped under hot ash by the eruption of Mount Haruna in the early 6th century A.D. Unusually, the body was found facing the volcano. From the position of the lower limbs, it seems he was standing and then fell to his knees, finally falling forwards onto his face before the hot ash swept over him.

“Under normal circumstances, you would flee if pyroclastic flows are rushing toward you and bringing waves of heat. But this person died facing it,” said Shinichiro Ohki, of Gunma Archaeological Research Foundation.

“Maybe, if he were someone of a high position, he might have been praying, or doing something in the direction of the volcano and attempting to appease its anger,” Ohki told AFP on Monday. 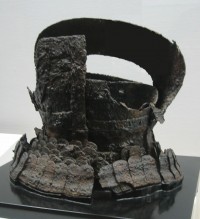 The armor he was wearing indicates that he was very much someone of status in the community. It was a type of scale armor called keiko or kozaneko made of small steel or iron plates connected together by leather strips. This style was imported from Korea during the late 5th century, a time when the aristocracy was becoming increasingly militarized. It was designed for use on horseback, armed cavalry having recently been introduced to Kofun period Japan from China via Korea. Only the military elite would be able to afford a suit of keiko armor.

Around 600 suits of armor of this type from this period have been discovered in Japan, but they were all found placed in tombs next to their owners. This is the first time someone has been found actually wearing his armor. Perhaps because the volcanic eruption caught him unprepared, he was only wearing the torso and thigh protection pieces, not the entire suit of armor.

A second partial piece of armor was found about three feet west of the human remains, and the incomplete skull of an infant was found about 10 feet east. The baby was no more than a few months old. They were found in the same pumice layer in the same groove, meaning that both the infant, the armored man, and the second piece of armor were all buried together by the same pyroclastic flow.

Archaeological surveys in the area have been ongoing since 2010 due to construction work of a highway above the site. The Kanai Higashiura site and the two neighboring sites of Kuroimine and Nakasuji are known as the “Pompeii of Japan” because they were buried by two 6th century eruptions of Mount Haruna. The armored gentleman was killed in the first eruption which left a layer of pumice one foot thick. The second took place around 550 A.D. and was much a greater eruption, burying the area under a pyroclastic flow that hardened into a layer of pumice almost seven feet thick. That was Mount Haruna last hurrah before going dormant.