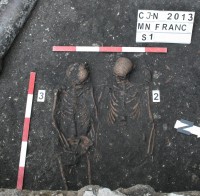 As an avowed lover of skeleton sweethearts, I’m charmed to report the discovery of a double burial in Cluj-Napoca, Transylvania, Romania, wherein a male skeleton and a female skeleton from the late Middle Ages were found facing each other and holding hands. The dearly beloved were unearthed by archaeologists from the Institute of Archaeology and Art History and the Cluj National History Museum excavating the courtyard of the Sigismund Toduta Music High School, originally a 15th century Dominican monastery.

The monastery was built around 1455 on the site of a Roman church and an earlier 13th century monastery. It was active only for a century before it was secularized in 1556 amidst the upheaval of the Reformation. The lovers therefore can be contextually dated to between the 1450s and 1556. The material and style of the coffin nails confirms the 1450-1550 date range.

According to Adrian Rusu, senior researcher at the Institute of Archaeology, there is a possible Romeo and Juliet angle here (which of course is being promoted far and wide despite its tenuousness) in that the man appears to have been killed by a blunt-force blow that broke his sternum, while there is no immediately obvious cause of death for the woman. Her skeleton is that of a healthy 30 year old. She can’t have committed suicide Juliet-style when her man died because she would not have been allowed to be buried in consecrated ground, and certainly not within the hallowed walls of a monastery. Perhaps, Rusu speculates, she died from a heart attack or a stroke brought on by the shock of his accidental death. 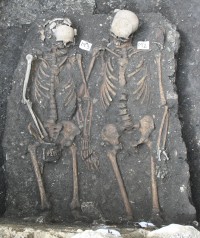 Sure, he is totally pulling that explanation out of his fundament and his appreciation for the PR value of our collective cultural vernacular, but it is mysterious that they died fairly young, at the same time and only one of them shows signs of fatal trauma. I can think of several explanations that don’t require the broken heart ex machina, though. She could have died first of an illness that can’t be detected in the bones or that hasn’t been yet. She could have had an unfortunate encounter with the wrong mushroom. The male then entirely by coincidence had some kind of workplace accident or tangled with the wrong horse that broke his sternum with one well-placed kick. Really, there are many possibilities.

Two other sets of remains were found in the same area, one of an infant and the leg bones of another individual. Whether they bear any relation to the lovers is unknown. One genuine fact that can be deduced from the burial is that they must have been relatively wealthy, or had wealthy family members, to afford such a premium spot inside the monastery. This was an inner courtyard with a fountain and decorative garden and an area for the monks to pray and read religious texts. Placement here was like a turbo boost of sin forgiveness, something particularly desirable when a person died unexpectedly and thus without a final confession.

This excavation is phase one of a larger restoration project. The Dominican monastery is one of three important ecclesiastical structures from the Middle Ages still standing in Cluj. (The other two are the 15th century gothic St. Michael’s Church and the 15th century late gothic Calvinist Reformed Church.) It’s in desperate need of extensive archaeological renovation. When the courtyard was concreted over in the 20th century, it created a major water problem. No longer able to escape up through the soil, the water began to climb the walls of the building instead.

The funds needed to save this nationally important structure are hard to come by these days, which is why the archaeological team will be applying for EU funding after the preliminary dig is complete in two weeks. This first round of excavations is both an exploration of what kind of work is necessary and about finding material that will sweeten the pitch. A Romeo and Juliet burial that makes international news would seem to be just the thing.

Not that the sexy angle is all this monastery has going for it. In addition to its architectural significance — look at this amazing door — it’s also directly connected to a remarkable historical first: the first edict of religious toleration promulgated by a European ruler. In 1556, Isabella Jagiellon, Queen Dowager of Hungary (which included Transylvania), and her son John II Sigismund were invited by the legislative assembly to put the country, ravaged by wars between Archduke Ferdinand of Austria and the Ottoman Empire of Suleiman the Magnificent, back together. The Diet elected John king but as he was only 16, Isabella was co-ruler. During the transitional period when they worked on rebuilding government, she and John lived in the monastery for nine months.

In 1557 she issued the Edict of Religious Tolerance which declared:

Each person [should] maintain whatever religious faith he wishes, with old or new rituals, while we at the same time leave it to their judgment to do as they please in the matter of faith, just so long as they bring no harm to bear on anyone at all.

This was forty years before Henry IV of France issued the famous Edict of Nantes granting freedom on conscience to the Protestant Huguenots after years of religious wars.

Queen Isabella died in 1559. Her son, the first and only Unitarian king, continued to support religious freedom during his rule, sponsoring popular public debates and issuing the Edict of Torda in 1568.

His majesty, our Lord, in what manner he – together with his realm – legislated in the matter of religion at the previous Diets, in the same matter now, in this Diet, reaffirms that in every place the preachers shall preach and explain the Gospel each according to his understanding of it, and if the congregation like it, well. If not, no one shall compel them for their souls would not be satisfied, but they shall be permitted to keep a preacher whose teaching they approve. Therefore none of the superintendents or others shall abuse the preachers, no one shall be reviled for his religion by anyone, according to the previous statutes, and it is not permitted that anyone should threaten anyone else by imprisonment or by removal from his post for his teaching. For faith is the gift of God and this comes from hearing, which hearing is by the word of God.

Therefore this monastery bears the distinction of having been victim of religious conflict — it was sacked twice before it was decommissioned — and the place that helped nurture ground-breaking religious tolerance. Surely that alone makes it worth funding. (Also the door.)