The Chaco people lived in the southwest United States between 850 and 1250 AD. One of the most dramatic structures they left behind is known as Chimney Rock, a great house built on a mesa near Pagosa Springs, Colorado.

Archaeologists from the University of Colorado have found bone remnants that suggest the inhabitants of Chimney Rock ate fancier meals (ie, venison) than the folks living on the ground below the mesa (ie, rabbit).

The university team spent five weeks this summer digging at the Chimney Rock Great House, which was inhabited between A.D. 1075 and 1130. The team had access to two rooms for the first research dig allowed by the U.S. Forest Service at Chimney Rock since the 1970s. It is in those rooms that they found the remnants of meals to support their theory.

Under the rock floors, where the builders would have discarded their trash as they were constructing the rooms, archaeologists found the bones of small animals. Above the floor, they found the bones of larger mammals — either the elk or deer that are plentiful in that area. They found no tools to indicate the food was prepared in those rooms.

They’re thinking that maybe the commoners down on the ground who built the structure hauled the big game and water up to the elites living in Chimney Rock.

University of Colorado professor Steve Lekson theorizes that the Chimney Rock dwellers may have been sent there from the capital of Chacoan culture in New Mexico in order to perform some essential cosmic rites. Chimney Rock was a lunar observatory built in a grand style very much unlike the below-mesa dwellings.

It seems the rabbit eaters may have delivered elegant repasts to the Chimney Rock elites, as tribute or simply as part of their cultural duty. 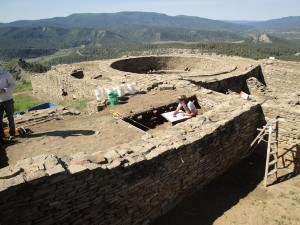