Today marks the fifth anniversary of the looting of the Iraq National Museum in Baghdad. I remember being horrified, aghast, on the verge of tears whenever the realization of what we had lost sunk in.

What I didn’t know is how much worse it could get. How the entire country would be stripped of its (and our) precious history. How archaeological sites that testify to our earliest civilizations, where people first invented writing, cities, the wheel and so much more, would become pockmarked no man’s lands of chaotic rubble.

The Oriental Institute of the University of Chicago is hosting an exhibit on the looting of Iraq. Catastrophe! The Looting and Destruction of Iraq’s Past opens this evening in Chicago and will remain until December 31.

The exhibition will consist of photographs as well as objects from the museum’s collection. “It summarizes results of investigations into the looting of the Baghdad Museum and updates efforts to recover the artifacts that were stolen,” said Geoff Emberling, Director of the Oriental Institute Museum.

The exhibition also will document the looting of archaeological sites with a series of aerial photographs that show the increase in damage through the past few years and other ground-level pictures of the looters at work. “A central section illustrates the importance of archaeological context through several case studies that show what is lost when a piece is looted. The exhibit presents an overview of the international trade in antiquities and the ways in which it directly promotes the looting of the sites,” Emberling said.

If anyone has a chance to see this exhibit, please let me know. I would dearly love to hear all about it. Meanwhile, a companion publication is available for sale or freely downloadable as a pdf.

I’ve read it and I cannot recommend it enough. It’s 82 pages long so eminently readable, although painful in the horror it describes. Here’s one example to give you an idea of what you’ll find.

A bull-headed lyre excavated from the Royal Cemetery of Ur and dated ca. 2800 B.C.: 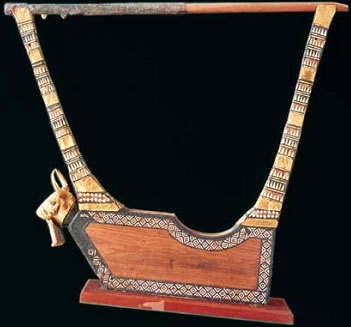 That same lyre after looters pillaged the museum on April 10, 2003: 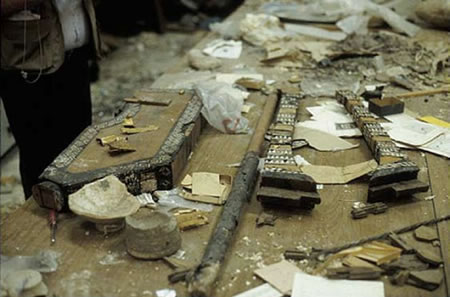 Tonight, SAFE is holding a candlelit vigil in memory of the tragic loss of our cultural heritage. Click here to see if there is a vigil in your area.

4 thoughts on “Cradle of civilization plundered 5 years ago today”