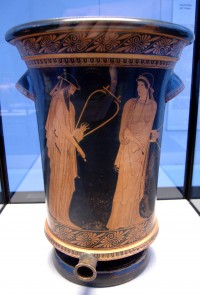 Although the 7th century B.C. Greek lyric poet Sappho of Lesbos was one of the most revered poets of antiquity and highly prolific, by the Middle Ages most of her works were lost. Only one complete poem and parts of four others have survived, including three fragments among the Oxyrhynchus Papyri. Now two new poems have been found on a 3rd century A.D. papyrus in private hands.

The anonymous owner brought the papyrus to Oxford University classicist and papyrologist Dr. Dirk Obbink who recognized its enormous significance. The condition is exceptional. Harvard classics professor Albert Henrichs calls it the best preserved Sappho papyrus known to survive. The two poems are 20 and nine lines each, with a total of 22 lines preserved in their entire length. The last seven lines are missing three to six letters from the beginning and end of verses and there are only traces of the last line remaining.

The subject matter is even more exciting than the condition.

One of the two recovered poems, Prof. Henrichs notes, speaks of a “Charaxos” and a “Larichos,” the names assigned by ancient sources to two of Sappho’s brothers but never before found in Sappho’s own writings. It has as a result been labeled the Brothers poem by Prof. Obbink. 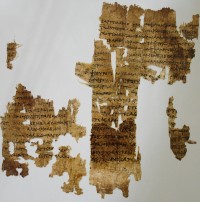 “There will be endless discussion about Charaxos and Larichos, who may or may not be Sappho’s brothers,” Prof. Henrichs commented. One important point in that debate will be the Brothers poem’s clear implication that Charaxos was a sea-going trader. The historian Herodotus, writing about two centuries after Sappho, also describes Charaxos as a wayfarer—a man who traveled to Egypt, where he spent a fortune to buy the freedom of Rhodopis, a beautiful slave he had fallen in love with. Upon his return home, Herodotus relates, Sappho brutally mocked her brother’s lovestruck folly in one of her poems.

The Brothers poem contains no such mockery, but rather depicts an exchange between two people concerned about the success of Charaxos’ latest sea voyage. The speaker — perhaps Sappho herself, but the loss of the poem’s initial lines makes this unclear — advises that a prayer to Hera would be the best way to ensure this success, and expounds on the power of the gods to aid their favorites. The poem’s final stanza speaks of Larichos, presumably Sappho’s younger brother, “becoming a man…and freeing us [Sappho’s family?] from much heartache.”

The second poem is an appeal to the goddess Aphrodite, possibly a prayer for aid in securing the affections of a new lover.

The source of the papyrus is not known. It’s most likely to have come from Egypt where the dry climate preserves papyrus like the Oxyrhynchus fragments.

Dr. Obbink has published a paper about the discovery which is available online here (pdf). It includes a transcription (not a translation) of the text, so those of you who can read Aeolic Greek can read the full poems.

UPDATE: The Telegraph has a translation of the Brothers Poem!

Still, you keep on twittering that Charaxos
comes, his boat full. That kind of thing I reckon
Zeus and his fellow gods know; and you mustn’t
make the assumption;
rather, command me, let me be an envoy
praying intensely to the throne of Hera
who could lead him, he and his boat arriving
here, my Charaxos,
finding me safely; let us then divert all
other concerns on to the lesser spirits;
after all, after hurricanes the clear skies
rapidly follow;
and the ones whose fate the Olympian ruler
wants to transform from troubles into better –
they are much blessed, they go about rejoicing
in their good fortune.
As for me, if Larichos reaches manhood,
[if he could manage to be rich and leisured,]
he would give me, so heavy-hearted, such a
swift liberation.