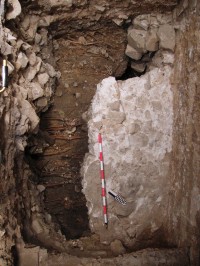 A mass grave of victims of the Black Death, the pandemic that killed half the population of Europe when it struck in the mid-14th century, has been discovered under the sacristy of the Basilica of Saints Justo and Pastor Martyrs in Barcelona. Even though the plague hit the Mediterranean countries the hardest, this is the first Black Death mass grave ever found in Spain. The fact that it was found in a church may suggest an explanation: in Spain the dead were buried in pre-existing churches and cemeteries, unlike in England and France where they often broke new ground for plague burials.

The church of Saints Justo and Pastor Martyrs is in the historic center of Barcelona, within the walls of the ancient city of Barcino, founded as a castrum (a Roman army camp) in 15 B.C. during the reign of the Emperor Augustus. In 2011, the Institute of Culture of Barcelona and the Basilica signed an agreement to excavate the church as part of a city-wide plan to rediscover the remains of Roman Barcelona.

Excavation of the sacristy began in 2012. Archaeologists found a section of a baptismal font from the Visigothic era, the remains of two Roman walls following the ancient city grid, and the 14th century mass grave with the skeletal remains of men, women and children. At first count, there appeared to be 104 people buried in the pit, but upon further investigation the body count increased to around 120. The current Gothic church was built between 1342 and 1574. They got to the sacristy area in the mid-15th century and construction impinged on the mass grave. Most of the bodies were removed at that time and the remainder were hemmed in by the Gothic walls. Calculating from the density of the remains and the size of the original grave (13 feet long, 11 and a half feet wide, five feet deep), archaeologists believe 400 plague victims were buried in the space.

They were identified as plague victims almost immediately. The demographic variety, well-preserved bones with no signs of fatal injuries and the fact that they were all buried around the same time strongly suggested they were felled by a widespread contagion. Despite the pressures of the epidemic, they were buried with respect. The bodies were laid out face up with their arms by their sides or crossed. They were placed close together, but arranged carefully rather than dumped in haste or crammed in head-to-foot to maximize space.

The corpses were unclothed, and wrapped only in linen shrouds, lined up in rows, 11 bodies deep, and were then covered with quicklime dissolved in water to attempt to stop the disease spreading and mask the smell of the rotting bodies.

DNA tests on the teeth of several of those buried in the mass grave carried out by the University of Tübingen show the presence of Yersinia pestis, a bacterium associated with rats and other rodents that was transmitted by the parasites they carried, particularly fleas, which injected it into humans when they bit them.

The bodies are being kept at the church while research is ongoing. They will be reburied in the church when the study is complete.