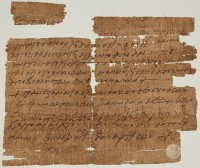 A researcher has discovered an important fragment of papyrus that is an early example of Christian scriptures used as an amulet at the University of Manchester’s John Rylands Library. Dr. Roberta Mazza, a Classics and Ancient History professor and papyrologist with a particular interest in ancient religions, was looking through the 1,300 uncatalogued and unpublished pieces of papyrus in the library’s Greek and Latin Papyri collection as part of a pilot program to research, conserve and digitize the fragments. She found a papyrus about eight inches high and six inches wide with clear Greek writing covering one side and a few faint lines of Greek on the other.

The papyrus is creased, with one vertical line dividing it in half and four horizontal ones. That suggests it was folded up into a packet 1.2 by 4.1 inches in dimension and kept either in a container in the home or perhaps worn around the neck as amulet to ward off evil, a common practice in ancient Egypt. Before the advent of Christianity, these kinds of charms used magic incantations and prayers to the Egyptian or Greco-Roman deities. The writing on this fragment, however, was found to be a combination of Bible verses, including Psalms 78:23-24 and Matthew 26:28-30.

The full text of the papyrus:

Fear you all who rule over the earth.

Know you nations and peoples that Christ is our God.

For he spoke and they came to being, he commanded and they were created; he put everything under our feet and delivered us from the wish of our enemies.

Our God prepared a sacred table in the desert for the people and gave manna of the new covenant to eat, the Lord’s immortal body and the blood of Christ poured for us in remission of sins.

Radiocarbon analysis dates the fragment to between 574 and 660 A.D. That makes it the is the earliest Christian charm papyrus found to use the Eucharist liturgy in a charm and the first to refer to the bread of the Last Supper as the manna of the Hebrew scriptures. It wasn’t written by a priest or someone transcribing verses from a Bible. Dr. Mazza notes:

“It’s doubly fascinating because the amulet maker clearly knew the Bible, but made lots of mistakes: some words are misspelled and others are in the wrong order. This suggests that he was writing by heart rather than copying it.

It’s quite exciting. Thanks to this discovery, we now think that the knowledge of the Bible was more embedded in sixth century AD Egypt than we previously realized.” 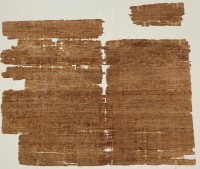 The faint writing on the other side, deciphered using spectral imaging techniques, was a receipt for the annona, an in-kind tax on crops named after the goddess who personified Rome’s grain supply (the grain fleet and the grain dole were also called the annona). That means whoever made the charm recycled an old receipt and just used the other side. The receipt was so faded because it was the outside while the protective Bible verses were folded up safe inside the amulet packet.

The fragment was purchased on the antiquities market in Egypt around the turn of the 20th century and has been in the John Rylands Library collection since 1901 or so. There is indication of who owned the charm, but the tax receipt references the village of Tertembuthis in the countryside near the ancient town of Hermoupolis Magna (modern-day el-Ashmunein) in Middle Egypt, so it was probably a local man.